I started watching the BBC evening news last night and then it all seemed to go wrong. We began with politics and went straight into our Chancellor's pre budget report, changes to inheritance tax, changes to non domiciled tax status and a new green flight tax. We heard the usual opposition party rhetoric, although it seems that perhaps on this occasion they had a right to seem slightly aggrieved given that their voter attracting strategies of last week have simply been pinched by the Labour Party. We saw Gordon Brown, grinning like a cheshire cat.

And then we seemed to move into Wonderland. Somehow, Nick Robinson, the BBC political reporter, and to my mind a nefarious character indeed, decided that to metaphorically represent the political shennanigans, he would utilise the term "shot foxes" and illustrate such with images of a fox, running through a field, the crosslines of a telescopic rifle sight superimposed upon the creature . Nick was quick to point out that no actual foxes were shot for the purposes of this report.
The news continued, an economic and financial squeeze seems likely, we heard debate and scaremongering over this, changes to capital gains tax etc. etc. Our next feature was the Post Office strike, we saw a fish factory in Somerset who face problems over this and then turned to the workers themselves, who told how they feel that their employment conditions are deteriorating in front of them, however comment was made that their employers wish them to work all the hours they are paid for, thus implying that at present this does not happen. Lachlan started crying then, and it was difficult to hear the last three main features properly, or to take notes. They were however, Law and Order, the new European Treaty which seems imminent and music distribution.
I started thinking a bit more - we had the foxes, once persecuted by mainly the upperclasses, and indeed our monarchy. Then the Post Office, the solitary threadbare reminder of our once exquisitely robed national companies where it was once commonplace for a postie to run round his route, and as such be allowed the privilege of an early finish - not nowadays, heaven forbid. Law and Order, we heard of greater powers to be given to the relevant authorities, all under the guise of terrorism. Then the European Treaty, bringing us all together in line, one big family under the one umbrella. Finishing with music, Radiohead releasing a new album, pay what you wish via internet. Reference was made to another band, who are distributing their next single free, I missed the group. Then we saw Madonna, queen of pop, singing Like a Virgin on Top of the Pops, twenty five years ago no less.
Lachlan was still crying, so I juggled him up and down for a while, and as I did so, all these seemingly unconnected stories began to form a picture. The picture is change, but more importantly, change for the better. The foxes are no longer in fear of huntsmen; the post office, lazy workshy bastards, now there's another change that seems better; law and order, well it's terrorists we are talking about here - anything to protect us; the European Treaty, being sold by our Government as a benefit and then, finally, music. Once we had to go to the record shops, now we can simply download it at home - so much easier - and pay what you think, what could be better.
From Radiohead to Reynard, and virgins to queens, welcome to Wonderland
cheers 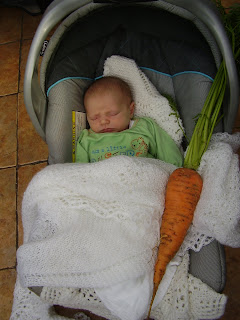 Posted by Newspaceman at 15:41

I don't know whether I'm more impressed with your wee bairn, Lachlan, or the size of that blinkin' carrot. I assume you're the proud father of both items, then?
I always said that my young'uns always looked like angels while they were sleeping, but that soon changed when they woke up.
Anyway, I'm still enjoying your news reports, thanks again.:-)

Hiya Martin, I was impressed myself about both, being honest the crying could drive you demented but he seems to be getting a bit mellower, the last day anyway.

The carrot was far superior in size to any of the others I grew, the plot is a bit stoney but it will sort itself out over time. I am just a novice at vegetables to be truthful, it should be a bit more organised next year with continous produce and better use of the space.

I have still got the parsnips and broccoli to come, they seem healthy enough so fingers crossed.

Thanks for your ongoing comments, much appreciated.

Those foxes, just don't go away do they?