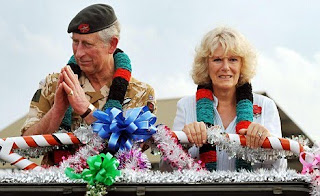 In yesterday's very short post we touched on the forthcoming role of Princess Diana as an ISIS type goddess of the future, thus her son, William, playing the part of Horus, a god-child conceived with Osiris (who's penis had been eaten by a fish, a replacement fashioned from gold).

In the depths of my imagination, I considered that perhaps the bloodline of Charles represented the golden phallus, whilst the Jacobites (Stuarts/Stewards/Bloodline Protectors) resonated Princess Diana as Isis herself, the earth mother. Thus over the last 400 years or so, we have seen the modern reincarnation of an ancient "myth" with Horus (Prince William) ongoing . This I was going to tie in with the Orion star belt, Sirius (given Egyptian beliefs) and Jeff Nisbet's epic Mystery of Bannockburn research, where he notes the "Scottish" army praying in the morning as, in the heavens, the belt stars rose shortly behind Venus (The Morning Star/Lucifer) followed by the Sun. For it was at Bannockburn that the Knights Templar are alleged to have given a hand to Robert the Bruce's forces (Braveheart Wallace having resigned his post shortly before) and it was from Bannockburn that the Declaration of Arbroath was formed, the blueprint for America's Declaration of Independence.

I was maybe wrong though.

The Prince of Wales says he believes he has been placed on Earth as future King ‘for a purpose’ - to save the world.

Giving a fascinating insight into his view of his inherited wealth and influence, he said: ‘I can only somehow imagine that I find myself being born into this position for a purpose.

‘I don’t want my grandchildren or yours to come along and say to me, “Why the hell didn’t you come and do something about this? You knew what the problem was”. That is what motivates me.

‘I wanted to express something in the outer world that I feel inside... We seem to have lost that understanding of the whole of nature and the universe as a living entity

(Strangely, I share Charles' sentiments. The difficulty is that, as Charles knows, there are too many humans, we are basically a plague on the planet)
Wrong, unless another deep-rooted script is being played out here concurrently by the "elite": the Book of Revelations with Wills as "antichrist" and Charles as the Messiah. If so, what will happen to the "chosen ones" who are saved, the ones who perhaps reject living in the city and move into the smaller rural villages if, for example, an Olympic size killer-flu virus strikes. Will they just become the original gnostic "slaves" of Eden, living in ignorance with new "Gods", waiting for their apple bearing Lucifer ?
cheers
Mystery of Bannockburn.
Posted by Newspaceman at 08:29 5 comments: 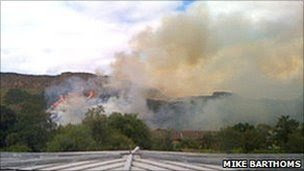 Given previous postings and following on directly from my last posting: a communication regarding the Pope, The Queen, Holyrood and sphinx-like, Arthur's Seat, we note from the BBC of a large grass fire outbreak on Tuesday past, the alarm raised at quarter past three, or, as the BBC state it: 1515.

Posted by Newspaceman at 19:33 No comments:

The Proof of the Pudding 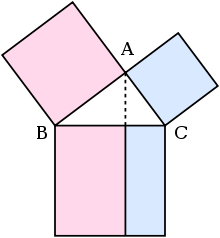 When one thinks White house, one thinks America. However, one may be wrong. There is an older white house, or Candida casa, in Scotland - a church established in by St. Ninian in the fifth century which later became his shrine.

Little is documented of the saint, although he is credited with being an early Christian missionary among the Picts. His feast day is 16th September, the same day as the Pope flies into Edinburgh for his UK visit, and thus a parade has been organised in the capital to coincide with the Pontiffs spellbinding meeting with the Queen. 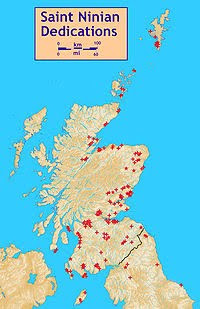 As the two top dogs chinwag at Royal Holyrood Palace, a procession will take place along Princes Street: 1000 pipers and 800 children from schools named after St. Ninian to be followed by a "pageant featuring 26 characters from Scotland's Christian past". None other than Catholic hating John Knox, the leader of the Protestant reformation, is to be featured, for, as we note from the Evening News' Opportunity Knox for the Pope's parade :

There is another connection between the Holyrood and the Scottish white house, one which takes us to the later U.S. building. In 1128, King David claimed to have been saved by God from a deer which he was hunting, the deer's antlers turning to a cross as it attacked him. In recognition he began building an Abbey on the spot, in the shadow of Arthur's Seat, to be known as Holy Cross or Rood. Also in 1128 a new cathedral and priory were built on the Candida Casa site.

As well as Abbey building and hunting, King David is renowned for the many changes he brought to Scotland known as the Davidian Revolution, including Gregorian reformation, foundation of monasteries and the Normanisation of the government. All the fresh building work brought skilled stone masons and it was around this period that a lodge opened, indeed the Mother Lodge of freemasonry, number 0, located at Kilwinning.
And from there the lodges expanded over the globe, utilising the slave, tobacco, whisky and cotton trades to establish the backbone to the modern Western world and economic structure we inhabit today.
And, as noted before here, from this historic grand meeting on the 47th Problem of Euclid resonating 16/9 we find another big problem brewing.
The aforementioned unification and a fresh, dark Prince for all to worship. 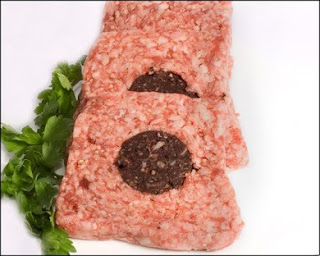 cheers
Image - Blackheart sausage, the brother to the Braveheart as noted in previous post.
St. Ninian.
John Knox.
Davidian Revolution.
47th problem of Euclid - the Veil lifted (Review of Freemasonry).
Masonry in Scotland before formation of Grand Lodge in 1736.
Posted by Newspaceman at 19:11 6 comments: 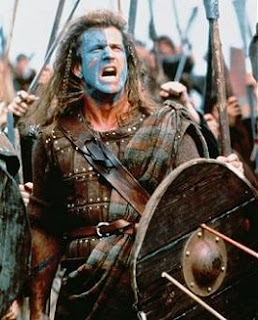 Back in 1995 Mel Gibson brought us Braveheart, a movie which stirred Scottish Nationalism, recounting the life and times of William Wallace and the First War of Scottish Independence with Stone of Destiny robbing King Edward (Longshanks) climaxing with the Battle of Bannockburn on 24th June 1314, where it is rumoured the Scots were helped by the Knights Templar.

As the ultra-popular movie became hip we saw it's adoption into popular culture. Colin Henry , the Scottish national soccer football captain, was given the nickname by the Tartan Army due to his tough, no nonsense approach. On 22nd June 2010, he was officially bankrupted at Blackpool court; apparently a fondness for gambling his downfall. The tabloids are still feasting on the story. 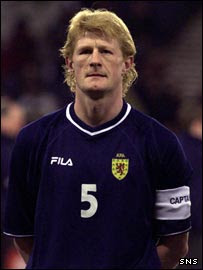 Another was media popular Glaswegian "business tycoon", Barry Hughes, who boxed under the moniker Braveheart before becoming a sportsman's agent, again using the same title as he subsequently did with his thriving "security" business and other interests. Last week he returned from Spain to find that the police had raided his mansion house, confiscating his and his families personal belongings and leaving simply bare living essentials. It seems that Hughes has told a couple of porkies in the past, inflating his income in order to obtain mortgage facilities and thus the authorities are claiming that basically all he owns was gained through the proceeds of crime. To add insult to injury they even took his customised Range Rover as he ate dinner on Saturday past at a top Glasgow restaurant. 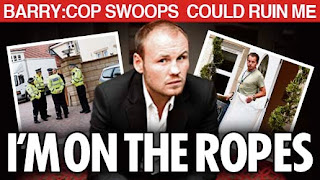 Then there is Mel. This month of Jew-lie has not been the best for him it seems, with multiple allegations of racism, wife beating and suchlike. Probably best to leave it at that for now, you hopefully follow the gist - it's not been a great time for the Bravehearts.

We can crack the esoteric code served up here by means of a Scottish delicacy again nicknamed after the movie: the Braveheart sausage. A slice of square sausage with the centre extracted and replaced with haggis. This resonates the forthcoming, truly awful New World Order: a new Zion, a global village where we are all equal slaves, orchestrated and architected over the centuries through the vehicle of Scots rooted freemasonry. 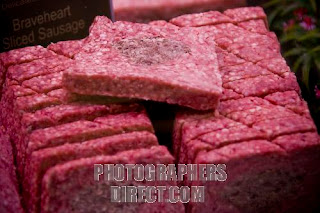 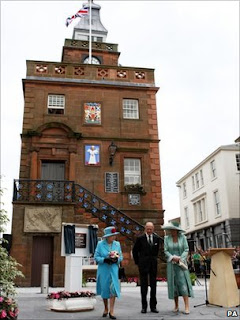 On 3rd March I noted the new "Saint Michael/Michael Jackson" statue in Dumfries, whilst in the same post, close-by Lockerbie arose, the latter in respect of a planned demonstration by the English Defence League - a now almost forgotten right wing media sponsored hooligan gang. (Fade to Grey) 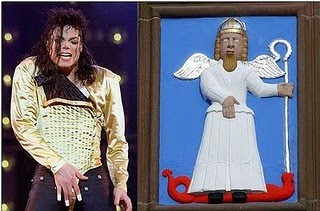 Cutting to the slow, we again saw the statue this week, when the Queen and PP visited Dumfries as part of their annual summer Scottish tour. Earlier in the jaunt Her Majesty had engaged in the ceremony of the keys ritual in Edinburgh, where she is symbolically handed the keys of the capital before returning them to our Lord Provost , stating that she considers him more than capable of looking after her city . Lockerbie too has again raised it's ugly head; seemingly Americans are asking general questions about the early release of al-Megrahi whilst Hilary Clinton has questioned one of our top-dogs about the role of pension fund stalwart, BP, in the affair, claiming that they were somehow constructive. I am wondering if maybe the Pope will visit the area when he tours on 16/9. Sorry about the dearth of posts recently, simply nothing really to write about. Running Man like, Raoul Moat, who lost his mind last week: raoulmoat control, his black Lexus, registration V322 HLX, winking towards the notorious American "Skull and Bones" society as indeed was his Red Indian resonating new killer hairstyle - the Mohican surely resonating Geronimo, who's skull is rumoured to be in the elite society's possession, took my mind.
cheers
Posted by Newspaceman at 04:41 7 comments:

Email ThisBlogThis!Share to TwitterShare to FacebookShare to Pinterest
Labels: C 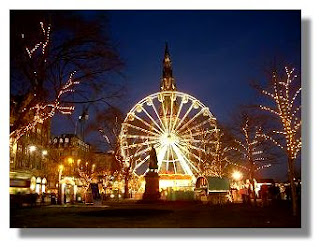 The last post ended with the theory that humans are being farmed, based on the Oatridge College crop circle scorching: the pyramid-like hill, Binny Crag, the shepherd's crook, and the sun, setting in the West, resonating the end.

Often, when I studied at Oatridge, I would muse over the cows and sheep, wondering if they knew they were being farmed and, if so, I wondered whether they were happy with food, shelter, and protection in return for giving their bodies for human consumption. I half hoped so, given my diet, but the other half hoped they did not; that they fostered a desire to escape, to wander wild and free.

Unlike the Pope, due on 16th September to meet Protestant pin-up, HM the Queen, at Holyrood, the pontiff's original route down the Royal Mile deemed too risky by security chiefs we are told, thus a diversion is to be put in place which will see the Catholic's top-boy travel along Princes Street instead. (see Come Dine with Me)

As such he will now travel past the imposing sandstone Scott Monument, a grey and dirty looking tower erected in 1844 in honour of author Sir Walter Scott, The Wizard of the North. The reason for the somewhat ugly appearance is apparently bitumen within the stone, quarried from Binny estate and transported to Edinburgh by rail and canal, which provides a suitable adhesion for the soot and dirt.

With cleaning, below the grime one would find the original, bright, yellow sandstone; rather like beneath the nowadays somewhat grubby religions of catholicism and protestantism, lies a bright, new, something to worship, a new Prince for the Age of Aquarius, commencing c2012.

Binny details from Ecclesmachan.org
Posted by Newspaceman at 19:58 No comments: