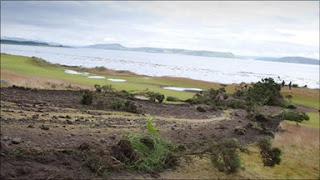 Tail end of last week saw white-rabbit-skin-hat attired Prince William and Kate visiting Calgary on the last day of their Canadian tour; taking in the rodeo and "launching" the annual stampede. Calgary is named after Calgary on the Isle of Mull, West Scotland. It was originally Fort Calgary, constructed to help enforce a federal order against whisky traders. Indeed, it is sure that many of the population, like untold Australians and Americans, have Scottish roots/blood ties, given the impact of the Highland Clearances. For anyone unaware of what the Clearances actually were; well, the poor Scottish people who resided in small, rural, farming habitations were forced to make way for sheep, thus packed onto ships and launched away to colonise . Their trusted Clan leaders, church, and State, facilitated this process; indeed the ministers told the people that they were sinners and deserved it. Their houses were then burned, their crops left to rot. Kate wore a lovely turquoise embedded holy-cross belt buckle. Scotland has many exports. 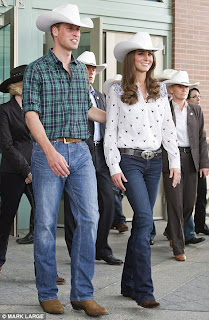 Middle of last week - 7/7 - saw the premier launch of the last Harry Potter movie - Deathly Hallows part 2. Creator Rowling lives in leafy Merchiston, an up-market suburb of south-central Edinburgh. Straight out of Compton it is not, although the residents do have attitude. Some say the Potter series is repackaged Satanism; mutton dressed as lamb.

Friday saw the Royal couple hit Los Angeles - city of angels - meeting and charming as they went. David Beckham played a starring role, as he did in the Wizard of Oz parody Beijing Olympic handover ceremony. (Things are not always as they seem),(bbc). 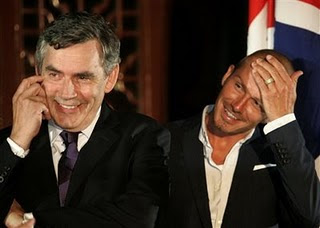 7/7 again, saw the 5 day Scottish Golf Open begin. The venue is Castle Stuart, on the Moray Firth, close to Inverness. Castle Stuart, as in the tower house, was built on land given to James Stewart (Lord James) by his half sister, Mary Queen of Scots (MQOS), on her return to Scotland in 1561. Mary subsequently fathered another James - 6th of Scotland and 1st of England - Bible reviser and Stuart King of a United Kingdom. MQOS got decapitated, her son got sympathy. MQOS liked golf, she was a pioneer in that respect. Scotland is the home of golf. William is House of Stuart, see Diana.

Tolkien's Hobbit, Chapter One : "Old Took's great-grand-uncle Bullroarer...was so huge (for a hobbit) that he could ride a horse. He charged the ranks of the goblins of Mount Gram in the Battle of The Green Fields, and knocked their king Golfimbul's head clean off with a wooden club. It sailed a hundred yards through the air and went down a rabbit hole, and in this way the battle was won, and the game of Golf invented at the same moment.".

On Friday a flash flood hit Edinburgh, caused by a highly localised heaven's opening. Morningside appears to have been central. From Morningside you walk up-hill, steeply, for maybe 200 metres till the brow. Then, as you descend, you enter Rowling's Merchiston. (bbc). 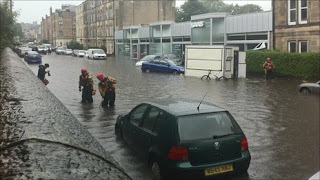 On Saturday morning a flash flood hit Castle Stuart, wiping out the day's event and causing significant, unprecedented damage. From the Scotland on Sunday report (here) :

"A DAY of Biblical proportions in the Highlands where the weather gods took a look down at Castle Stuart in the early hours of Saturday morning and decided, with all the venom they could muster, to let the course have it with both barrels.

The storm that blew in overnight was freakish, estimated at only three miles wide and ten miles long, so localised that up the road in Nairn and down the road in Inverness you wouldn't have had much of a clue about the carnage that was unfolding. The skies were a filthy grey, the day as foul as could be. "End of the world stuff," as Colin Montgomerie put it.

There were landslides on the 1st and 12th holes, giant chunks taken out of the age-old hillocks, the debris then streaming across the width of the sodden fairways."

Meanwhile, over in L.A. Saturday, Wills was playing polo, his shirt adorned with a sponsor: Royal Salute Whisky. Forget Fort Calgary. Royal Salute is blended by Chivas, in Keith. Keith, like the pulverised golf course, is in Moray. Royal Salute is premium, aimed at the wealthier, export market. The 38 year old version is called Stone of Destiny. The Stone of Destiny, if it is that, is the stone on which Wills is crowned King. It is likely that when this happens it will be in an "independent" Scotland. Keith too is the location of Lossiemouth, where it is said Richard Branson wishes to launch his WhiteKnight2 spacecraft from. 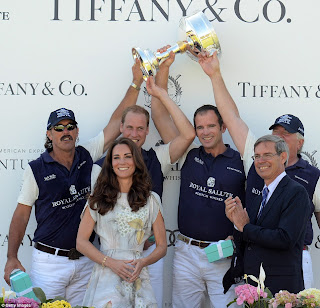 On the 30th, Wills swaps the actors of Hollywood for the actors of Holyrood Palace : Queen's grandaughter, Zara Phillips, wedding reception. That's the Edinburgh Holyrood I keep drumming on about : King David, alleged close encounters with "God" (he prayed to Him just as a deer he was hunting went to retaliate and was miraculously saved - a vision of a cross appearing), the Scottish Parliament, Arthur's Seat etc. The one where the Pope met the Queen last year, squarely on 16/9, before meeting the head of the Catholic Church, Cardinal O'Brian, at Morningside.

Meanwhile tonight, at Balado, at Scotland's T in the Park, the Foo Fighters will close the festival. "The band got its name from the UFOs and various aerial phenomena that were reported by Allied aircraft pilots in World War II, which were known collectively as foo fighters." (wiki). 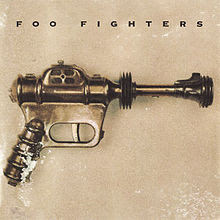