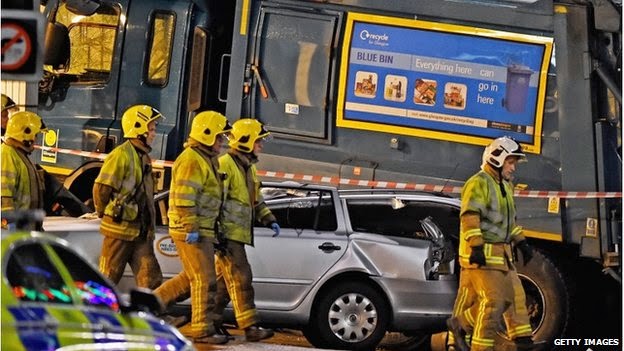 Back in December - Mirrors -  I noted how exactly 1221 days prior to the Glasgow refuse truck incident, copycat scenes from the movie World War Z, which was released for viewing on 21st June 2013, had been filmed at the same location. To me, the numbers are extremely suggestive, the occultish powers that be seem to thrive on 11's and 22's.

From the mail on line I note that Brad Pitt arrived in Glasgow two days prior to this, i.e. the 17th : "When they arrived in Glasgow at 2.30pm, silver vehicles with tinted glass were allowed onto platform 11 to whisk them away from a waiting crowd."

Note that 2 days prior to Brad's arrival, i.e. the 15th, filming of the Glasgow  movie commenced according to BBC News.

I touched on the 11th April earlier this month, in connection with Andy Murray, William of Orange, The Dunblane Massacre, The Matrix, 1984, etc. (Bride of Frankenstein)

cheers
Posted by Newspaceman at 14:29 No comments:

Pythagoras and Glasgow Rangers; the Clutha and 11 11. 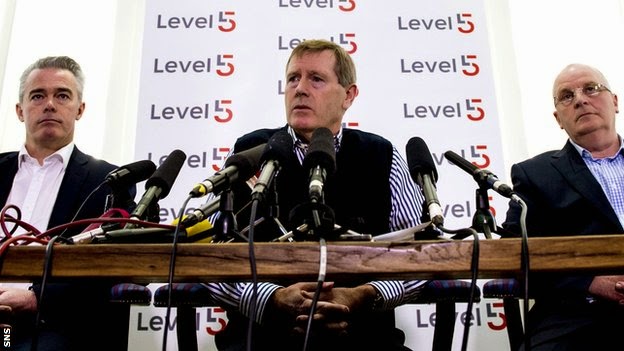 The above image is of South African businessman, Dave King, and two of his "three bears" mates, as they hold a press conference discussing the forthcoming Glasgow Rangers football club's extraordinary general meeting where Dave is going to attempt to oust the current board. The club's last AGM was held in Glasgow on 22/12,  the date of the refuse truck incident, 1221 days after the filming of a similar incident for the movie World War Z. (Mirrors)

I most recently noted the background to the seedy, sacrificial, affair in my post Fairy Tales.

Note the symbology up top, the numeral five being constructed out of an L (right angled) shape. The date of the E.G.M. is fourth of March. Thus 3,4,5, as in Pythagoras' triangle, the proof of the right angle, the 47th Problem of Euclid. Notwithstanding, freemasons dig their levels.

From The Masonic Trowel, re masonry's association with Pythagoras :

Although there may be no direct link between Pythagoras and Freemasonry, the teachings of Pythagoras have greatly influenced its structure and its teachings...

"The schools established by Pythagoras at Crotona and other cities, have been considered by many writers as the models after which Masonic Lodges were subsequently constructed. They undoubtedly served the Christian ascetics of the first century as a pattern for their monastic institutions, with which institutions the Freemasonry of the Middle Ages, in its operative character, was intimately connected.

"Like the disgraceful treatment of the autopsy of President Kennedy, Oswald's is similarly weird. Oswald was literally butchered in the "postmortem examination." Pieces were actually cut out of his body. The major incision in his torso resembled a huge "Y" which ran from the area of his groin to the solar plexus region. From there incisions were made to the right and left armpits. The so-called "two horns of the letter Y" supposedly symbolize the paths of virtue and vice: the right branch leading to the former and the left to the latter. The letter is sometimes referred to as the "Litera Pythagorae" (The Letter of Pythagoras): "Litera Pythagorae, discrimine secta bicorni, Humanae vitae speciem praeferre videtur" (The Letter of Pythagoras parted by its two branched division appears to exhibit the image of human life).

In the 47th Problem of Euclid lies a secret of the 3rd Degree of Masonry. Pythagoras is called by Freemasons "our ancient friend and brother." One of Pythagoras' main doctrines was the system of "Metempsychosis" which pertains to the passing of a human soul into the body of an animal."

I'll move on to the Clutha, the incident where the police helicopter crashed through the pub roof on 29/11/13, at 22.22, causing carnage a year and a day (important in magickal circles) after Marilyn Manson ( a great fan of James Shelby Downard) performed very close by; his last track Antichrist Superstar. (Marilyn Manson, Magick, Jodi Jones and the Clutha). 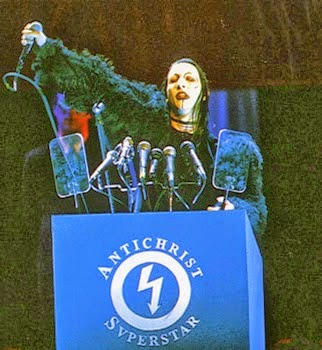 Today's "Daily Record" reports on how Scottish First Minister, Nicola Sturgeon, is getting frustrated as to the length of time the enquiry into the cause of the "accident" is taking to conclude. So much so that she has written to British Prime Minister, David Cameron, to ask him to "intervene to speed up the enquiry".

In her letter, she specifically prior communication from the Solicitor General of Scotland :

The Solicitor General for Scotland found it necessary to write to the Secretary of State for Transport on November 11, 2014 to express her concern at the dearth of information flow and lack of respect for and understanding of the obligations of the Crown Office and Procurator Fiscal Service and the police in relation to this investigation, and in particular in relation to the bereaved families.

cheers
Posted by Newspaceman at 13:54 No comments: 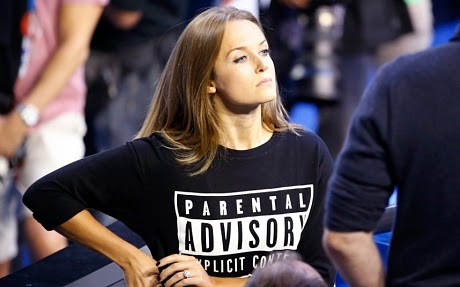 Since 7.00am when I saw it, the rest of the MSM appear to have confirmed it as factual, it is the correct date, the wedding to take place 64 days from now in Andy's Cromlix Hotel, close to Dunblane where he grew up.

It seems, to me, a rather ominous date to choose, the 101st day of the year.

Remember that Andy was at Dunblane Primary on the date of  "Thomas Hamilton's" massacre. He escaped by hiding in the headmaster's office.

During the legal enquiry into the massacre, Knight of the Thistle, Lord Cullen, allegedly received an anonymous letter. It was dated 11th April 1996 and stated :

"It is in the public interest that Lord Cullen be asked if he is a Freemason, given the widely held view by the public that Thomas Hamilton's Masonic affiliation was probably the reason that the Ombudsman overturned an earlier decision by Central Regional Council in 1983 to prevent Hamilton from running youth clubs, and that his Masonic affiliation probably facilitated his application for a gun licence."

The letter-writer said anyone involved in the inquiry who turned out to be a Freemason should be forced to resign - and that included Lord Cullen. The letter went on: "It is far too important to allow the Masonic implication to be whitewashed by furtive operations in the Freemasons, intent only in 'diverting a discourse' - a Masonic ruse - from the involvement of Freemasons and Freemasonry."

Meanwhile, on exactly the same date of the same year :

On 11th April 1689, William of Orange and his House of Stuart wife, Mary, had their coronation. A couple of years later saw the "blood sacrifice" Glencoe massacre, the MacDonalds being executed on the grounds that they had not been quick enough in pledging allegiance to the new "joint monarchs". Jimmy Savile dug Glencoe.

The allegedly Biblical Stone of Destiny, after it's repatriation by law students on Christmas Day 1950 from Westminster, was missing for a few months before, on the 11th April 1951, being left at Arbroath Abbey.  It now resides in Edinburgh Castle.

You asked me once, what was in Room 101. I told you that you knew the answer already. Everyone knows it. The thing that is in Room 101 is the worst thing in the world.

Q: The number 101 appears several times in the movie. What does it mean?

A: 101 actually appears a number of times in all three films, and though no one knows exactly what it means (if anything), the popular explanation is this: 101 is binary for 5 (which to a computer is the sixth number because computers count from 0), and the events of the three films take place in the 6th interation of the Matrix. Neo is the sixth One, this is the sixth time the machines have destroyed Zion, etc.

Meanwhile there's Aleister Crowley, who believed Boleskine House, Loch Ness,Scotland to be a focal point for energies. Back in 1904, a leap year thus an extra day slotted in to the calendar, Aleister was hanging about the Great Pyramid in Egypt, consorting with an fourth dimensional being/entity/angel he called Aiwass. After 3 days he - Aiwass, utilsing Crowley as a "medium" completed his The Book of the Law. The date was 10th April, whilst we know that the ancient Egyptians were fond of the Sun and it's movements above. 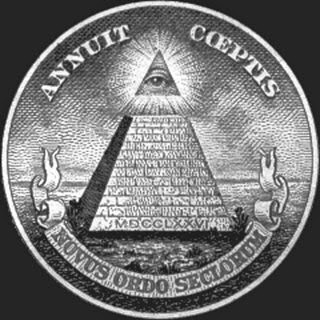 There's one other notable 11th April happening, and that's summer-solstice born, Prince William, receiving his wings from his father. The image below speaks volumes, as do the happenings noted above.

Unless of course, I'm barking. 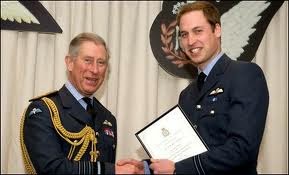