We opened with obesity on the early evening BBC News last night, it seems that doctors have warned of a "potential crisis on the scale of climate change", in fact an "epidemic" looms; given the startling new figures which claim that by 2050, a half of all men and women in the UK, will be clinically obese. Images were shown of the bottom half of some incredibly fat people and we heard of the economic cost that results. An aerobics class was displayed, to show us how it should be done - but it seems that the main problem is "too much fast food". A gentleman from the National Obestiy Forum told us more before we closed with talk of a potential solution -"monitor schools". More Pied Piper, surely ?

Politics waddled behind, it seems that Lord Falconer has criticised Prime Minister Gordon Brown, telling how his reputation has been fractured in light of the recent potential election storm, however Goverment Ministers have rallied behind him. It seems this will be a difficult week for Labour, with "the tricky issue of Europe" to deal with.
A British Tourist is amongst 8 who perished in a cave accident in Thailand.
Iraq, suicide bomber driving a tanker kills 18, imjures 27
A long feature next on Barack Obama, an American political candidate with "rock star status", tipped as the "new JFK". Images of BO frolicking in swimming costume with young ladies were displayed, however we moved on to Hilary Clinton before hearing how Barak is a hit in the "well heeled suberbs", but not in South Carolina, where "the poorest voters in the country" reside. We travelled there to see a poor man cycling and a single parent or two. It reminded me of the road from the Wizard of Oz and we too were reminded - about the Civil Rights movement, - black and white images of demonstrators were shown. There was mention of "a moses generation - a previous generation" before hearing that "blacks want one thing, whites want another". To close, we were told of an entire BBC programme covering this story - to be broadcast this week. Lewis Hamilton anyone ?
http://news.bbc.co.uk/player/nol/newsid_7040000/newsid_7044200/7044288.stm?bw=bb&mp=rm&nol_storyid=7044288&news=1#
A company of soldiers from the terratorial army have returned to the UK after a six month stint in Afghanistan
A Sunday story next, that of a "medieval jigsaw puzzle", an ancient church which has been rebuit and restored after falling into disrepair. For the first time in hundreds of years the "little Welsh church" was finally utilised yesterday, we saw the congregation "packed into it, just as they would have done in the middle ages". In its life there have been "many changes, from catholicism through to reformation"; another coming perchance ?
http://news.bbc.co.uk/player/nol/newsid_7040000/newsid_7041600/7041624.stm?bw=bb&mp=rm&nol_storyid=7041624&news=1#
sport to close, again much talk of England, the rugby, and Paris.
cheers 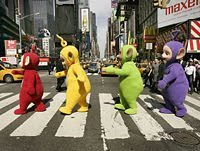 Obesity - Black and White ?
Posted by Newspaceman at 05:32

There won't won't be an obesity problem in 2050 if the weather keeps going increasingly nuts because there won't be any food grown on anything like the necessary scale for people to get fat - quite the opposite. I suppose the Telly(Dinner)Tubbies will have to start to eat each other.

Hillary Clinton is going to be (un)elected/selected as the new US President, that much was decided years ago. Bush/Clinton/Bush/Clinton - with over 300 million people living in the USA to choose from & these crooks keep getting in, of course it's not fixed....LOL I can't believe that the Yanks are gonna vote for someone named Obama...'tipped as the new JFK' - does that mean he'll get the Lone Gunman treatment if he doesn't play ball?

Unless of course the Christian Right and Israel lobbies vote for him.
I guess its up to the voting machines