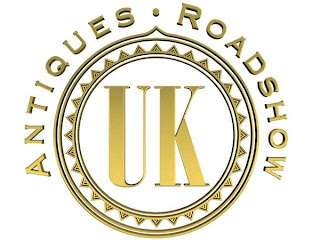 For the benefit of those unaware, the television programme the Antiques Roadshow could be deemed to be a British Institution. For thirty years it has provided successful feel-good television entertainment for the British public through the medium of financial valuation of antiquities in many forms and guises. The format is simple, a regional show is arranged and advertised, and on the day hundreds turn up to queue, most carrying bags and suchlike, all containing one or more historic artefacts which they purport have no idea of the value of.

Experts are then on hand to value said belongings, the cameras on hand to record events should a valuable rarity or unusual item appear. In reality, the majority of the featured items on the show are pre-selected, their owners having sumbitted details prior to the event, and having been chosen, simply turn up on the day for filming.
The show runs on a Sunday early evening, perhaps when one is most relaxed and as such open to suggestion. It is extremely popular. However, to your writer, there are more to matters than meet the eye and I intend to demonstrate this by means of listing each item detailed on the show along with any other relevant information supplied. I shall take up no more of your time at this stage, and simply allow your to digest and draw your own conclusions. Please note that I must also confess to having missed the first ten minutes of last Sundays show, due to circumstances beyond my control. However, this Sunday, I shall attempt to watch and report on the full contents.

First item was a cup and saucer, brought in by a young coloured lady who aquired it at a jumble sale for a few pounds. Our expert revealed it was a mass produced 1950's piece, a ceramic pattern called Homemaker, produced by Ridgeway pottery in England and retailed through that once great British Institution, Woolworths. It was in fact very popular at the time, an abundance of post war newly wed couples ensured a steady demand and as such, not very valuable, thirty pounds or so.

Followed by an axe, proudly sported by the chief Yeomen from the Tower of London no less. Michael Aspel, another British Institution and host and presenter of the show had left the valuation hall to meet with the Royal employee who discussed the axe's history, including beheadings, Queen Elizabeth 1st etc. No valuation was offered obviously, this was more an educational interest feature.

Then, "difficult subject matter", concerning lithographed prints of concentration camps, the artist a chap called Henry Pirek or thats how it sounded. The items had originally been donated to a charity shop and it was the daughter of the manageress who had brought them in. First thing our expert did was compare it to a previous item which had been brought to a previous show at some time in the past, concerning Hiroshima. Then, he waxed lyrical over "life in the camps", how bad it was in those "desperate times", "week after week, month after month", before telling the young girl (and us) that it was in fact "beyond our imagination". He then suggested that perhaps the Imperial War Museum would be a suitable place for the prints and offered no valuation, rather some more words of wisdom, "terrible things, must not forget it".

A dittery dorisy old lady brought in the next item, a lovely large piece of french furniture, a chest of drawers, with "solomonic columns" our expert suggested. When the lady spoke, our expert quickly spotted the hint of a foreign accent and delved further, it seemed the lady had "met an English sailor at war" and had returned with him to start a new life together after military operations halted. A "GI bride" our expert proclaimed as he valued the huge monstrosity at a pittance. Our dear lady confided that "I have'nt got space for it"

"Fate is a funny thing" another expert confided as he identified and valued a Moore Brothers table centerpiece. It was "made in the Land of Hope and Glory" he proclaimed as he turned it upside down to reveal the backstamp, a large "globe of the world", again not too an unusual item and valued accordingly.

An oil painting of the debating chamber of the House of Commons followed. It seemed that our painting revealed false ceilings, concealing galleries in which individuals could stand unseen, monitoring events below. Our expert told how these would have been used "by ladies", keen to "hear debate". Furthermore, he confided that only the feet of the MP's below, could be seen from above. Some background was provided, the building had in fact been destroyed by fire on 16th October 1834, apparently started by workmen burning "tally sticks". A large valuation was provided for this George Sharp masterpiece - we were assured it would secure a premium given it was "bound with English heritage".

It was time for a "stroll down memory lane" as we quickly cut through scenes of previous shows, and saw some highlights of the last thirty years, this being the 30th anniversary year of the programme. An abundance of older, blue rinse type ladies was evident, throughout this reminder of the show, beginning back in 1977.

Still in a happy vein, our next object de art was a wedding dress ,"mid 1930's, fluid shaped, art deco" our expert gushed. He suggested that perhaps the "Queen of Elton Palace" would be interested, in reference to the collecting streak of crooner and Di hag, Mr. John.
Books beckoned , we were invited to share in the splendour of two offerings, both from the Abbey of Westminster, the first was the official order of service for the Coronation of George 1Vth, the second, the 1953 Queen's Coronation's full music edition of service" signed by some Earls and indeed by Her Majesty herself. Our Royalty expert declared the second his favorite and told of a high valuation for both, given they were "unique and bound up with the Abbey". He then thanked the lady for bringing them in and "taking time off on a Sunday".
An old chest next, the interior top inlaid with a chessboard pattern, stuffed full of old medicines, some "fifty years old, going back to the war", the owner revealed as she was encouraged to tell more about her childhood, and her brother, the original owner who had now passed away. The expert then rummaged further and produced some soap, "a throwback to the war" he reckoned as he searched for some "secret drawers", containing "chessmen, draughtsmen" and candles, for light one assumes
An antique pressure cooker, salvaged from a skip, appeared up next. It was a large object, our expert spoke of "rocket science" and the resemblance to "an enormous hand grenade". Furthermore, its lid was "like a tank hatch". A quick reminder of the foods that would have been cooked in here, "way back in the thirties" was supplied, "meat, veg and sponge pudding" it seems were order of the day.
A pair of Spanish pistols were produced, our expert easily identified them as 1839, drawing reference to the King of Spain and the Carlist Wars before drooling over the "lion hammers" which adorned the weapon and assuring they were "made by a craftsman". The young owner provided further information, a present from the Mayor of Madrid to a long lost relative.
Coming up - A visit to the Guildhall, to see a very special item.
First though, a small stained glass object de art, showing St George. The present owner was not too sure of its origins, our expert suggested that it may have originally come from a church. He suggested the possibility that the church was perhaps located in Coventry, where the owner came from, and that it was maybe bombed by the Luftwaffe during the Blitz, the piece then scavenged. Our owner said nothing and it was valued at a few hundred pounds.
We went over to the Guildhall as promised to see a "very special desk", dating from 1780 and once belonging to the Duke of Wellington, in 1827 or so. We saw an old painting on the wall which contained the very desk being featured to somehow , our expert told how this was a difficult one, "how do you value provenance" especially when this portrayed times when "Britain was the world leader". £100,000 plus he estimated.
Next, another item which may cause one to "recoil on the subject matter", another old paintng, this one showing a dog and a monkey fighting. The lady owner told how she purchased it because of her "interest in astrology", she was born in the year of the monkey and mistakenly thought her brother was the year of the dog. Our expert told it was non PC and should perhaps be "kept hidden". He found it "interesting" though, it "shed a glimmer of light" on old London.
Last up two ladies, bequethed a couple of boxes by an old Aunt, brought them in on the off chance. Some vases first, "classic Royal Worcester", early 20th century. Then a Wedgwood pearl desktop item, in the form of a Viking longboat containing a Pharoes head inkwell. Classic roadshow, classic Auntie Beeb.

Nice one. Thanks Newspaceman.
I must admit that I watched it years ago, only in the hope of seeing the disappointment on a punter's face when they were given a laughably low valuation occasionally.
But I appreciate getting your take on the Antique Roadshow.
Cheers