On 19th October Prince William visited Faslane Military Base, home of the UK's Trident nuclear defence missile - the UK's only active nuclear weapon system.
Per wikipedia, 19th October is a Roman festival, in honour of the planet of war, Mars. It is named Armilustrium, a day when the weapons of the soldiers were "ritually purified and stored for winter".
http://en.wikipedia.org/wiki/Armilustrium 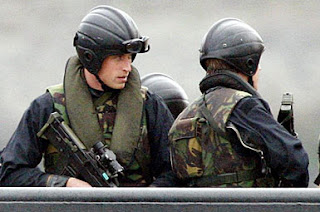 Now, additionally, interestingly, and to my mind disturbingly, the Queen was visiting the new £300 million Diamond Light Source synchrotron science research facility at Didcot in South Oxfordshire, also on Armilustrium.
A short news video about the basics
http://news.bbc.co.uk/player/nol/newsid_6330000/newsid_6333700/6333749.stm?bw=bb&mp=rm&news=1#
HM's visit, where she saw the work being carried out on viruses.
http://news.bbc.co.uk/1/hi/england/oxfordshire/7054019.stm
The attributes of the new unit seem very impressive, the technology appears to offer the ability of atomical alchemy - breaking matter down into its component atoms.
It all seems quite worrying really. 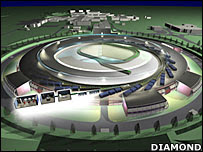 Posted by Newspaceman at 18:04