5th November 1605, Guy Fawkes allegedly attempted to blow up the House of Lords, as part of a Roman Catholic conspiracy, his target James 6th and 1st, Mary Queen of Scots son, UK amalgamater and Bible reviser. These days, here in the UK, we still celebrate the non-event by means of firework displays, bonfires, and effigy burning.

There was a firework display on Friday 4th November, at Taunton, Somerset, organised by the local rugby club at their stadium. Alongside runs the M5 motorway. Some elements of the media blamed smoke from said display for a horror, 37 vehicle motorway crash which claimed 7 victims. Blame has not been officially apportioned as yet. Witnesses spoke of a impenetrable blackness which suddenly descended. The club's logo includes a large dragon. (Guardian). 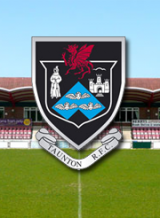 Meanwhile, up in Oban, Scotland, another firework story headlined. This year's display gained global recognition after the planned 20 minute long extravaganza took some 50 seconds after a "glitch". It went web-viral, pure rapid. Such are the days we live in. Things can go global, so quickly. Again the event took place a day early, on Friday, 4/11 (the third anniversary of Barack Obama's election victory), and was organised by the Oban and Lorn Lions. The location was Mossfield Park, part time home to Oban's Saints football team. The Saints logo appears to be a ruined Roman colosseum. (BBC News)

One of those who attended told the BBC that members of the association had "no input" and were "surprised" to discover Obama was on the bonfire. 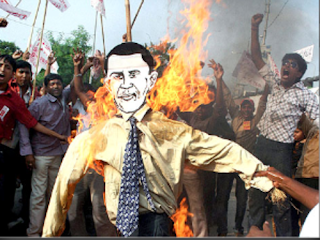 St. Andrews, notwithstanding it's "home of golf" association, is named after Scotland's patron Saint, his relics (bones and suchlike) transported here long ago (wiki) from Constantinople, under "supernatural guidance". St. Andrew is recognised as the driving force behind Scotland's conversion to Christianity in the 1320 Declaration of Arbroath, an independence declaration which formed the model for America's. The Saint Andrews cross, or saltire, was based on his choice of Crucifixion apparatus; he seemingly considered himself unworthy of the same form of cross Jesus was executed on, and opted for an X shape (see links at bottom). Obviously a lot of Andrew's "Christianity", amongst other things, has been exported directly from Scotland subsequently.

St, Andrew's Day falls on 30th November. This year we saw a gigantic strike by UK public service workers, an event British Prime Minister, David Cameron, called a "damp squib". More importantly though, greater events were unfolding, the self explanatory headlines Britain joins multi billion pound global bailout as key banks face new credit crunch and Europe faces 10 days to save the Euro, surely spelling imminent disaster, given it appears that a number of countries/huge financial institutions have chipped in to buy dollars to lend to each other:

Olli Rehn, Economic and Monetary Affairs Commissioner, said: 'We are now entering the critical period of 10 days to complete and conclude the crisis response of the European Union".

That 10, or X in Roman numerals, takes us nicely up to 10th December, a Saturday, thus it will be the following Monday, the 12th day of the 12th month and 12 days after St. Andrew's Day, when the markets re-open and we truly see the conclusion of the "crisis response". Curiously, this falls exactly three years to the day that ex (Scots) Prime Minister, Gordon Brown, hails EU recovery package (BBC) :

Gordon Brown has said European leaders have agreed to back an "ambitious and co-ordinated" recovery plan to help their economies through the downturn.

The package, negotiated at an EU summit in Brussels, will see 200bn euros of funding - equivalent to 1.5% of the EU total output, poured into economies.

Could it be that 12/12 will define the end of the economies we currently know, will go down in history as the day world systems finally collapse ? The twin towers of the euro and the dollar come crumbling to the ground. That that our "leaders" will admit "defeat", class the world "bankrupt", and pave the way for a new global system, a new global currency, and a New Order.

Note - It would not be the first time that the date 12th December has popped up here, I wrote about the economic 12/12 implications (America's tarp) some three years ago (One for the pot on a glorious 12th) along with Spirit's can you hear me ? , where I noted a grand cross in the heavens and leant heavily on, (luciferian and wife of 33rd degree freemason) Alice Bailey, an esoteric writer of some significance.

Mythomorph -lots on Scotland, Templars, freemasonry and suchlike.
Posted by Newspaceman at 20:21 12 comments: 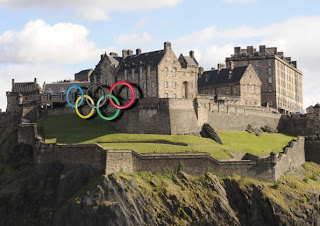 According to various news sources, planning permission has been sought to attach a giant Olympic ring logo to Edinburgh Castle - location of the "Stone of Destiny" - for a four month period next summer, advertising the London (Prince William) event.

Image from The Scotsman.
Posted by Newspaceman at 12:11 4 comments: