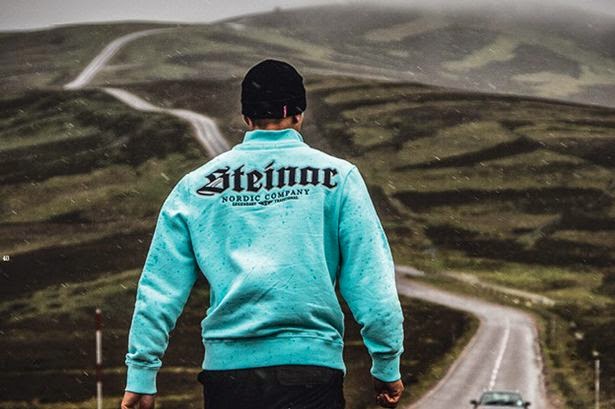 We touched on French fashion label, Brooklyn we go hard, and their utilisation of the ex Glencoe residence of probable occultist, Jimmy Savile, in the post All the world's a stage back in January.

Today we read from the Daily Record  that German "Neo-Nazi" clothing company, Thor Steinar, have also opted for Scotland for their latest catalogue, choosing locations in various parts of Edinburgh, The Forth Bridge and the Falkirk Wheel. 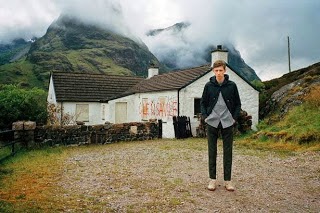 Back in 2012, Thor Steinar courted controversy after naming a shop Brevik, which some claimed was a reference to Norwegian "mass  murderer", Anders Breivik, him of Knights Templar infamy.

As noted here before, allegedly the Knights Templar fled to Scotland and helped in the decisive Battle of  Bannockburn. Some claim too, that freemasonry was spawned  by the same source.

It's also worth pointing out that Adolf Hitler was allegedly influenced by the "occult", and that his deputy, Rudolph Hess, allegedly flew to Scotland single handedly in 1941 in a vain attempt to broker a peace deal with the Duke of Hamilton, who he believed was "prominent in opposition to the British Government". (wiki)

As noted in our last post, Scotland is fast becoming a fashionable global focal point, with resulting "energies".

cheers
Posted by Newspaceman at 11:21 2 comments:

Its a kind of magick

Here @ newspaceman we are becoming  more enthralled by the digital sequence 101 day by day.

We have mentioned before the movie, The Matrix, and it's room 101 where Neo begins his journey.

We have mentioned before on numerous occasions that the 11th of April is the 101st day of the year.

That is, excepting a leap year, when the 10th of April takes the 101 spot.

The year 1904 was a leap year. It was the year that occultist, Aleister Crowley, visited Egypt's Great Pyramid, where he allegedly utilised "John Dee's" Enochian magick to contact an entity called Aiwass and compose the Book of the Law. Crowley completed his work on 10th April. 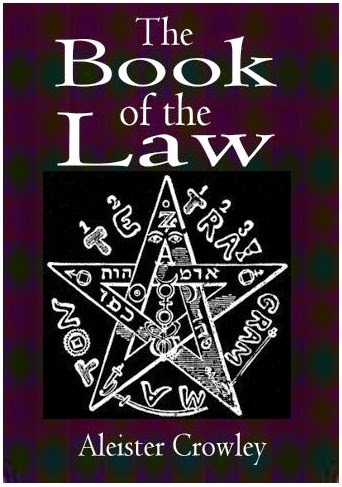 Police Scotland, who live for the "law", utilise the telephone number 101.

Aleister believed that Scotland was a focal point for "magickal energies"; so much so that he purchased Boleskin House @ Loch Ness to conduct his rituals.

Loch Ness is always a focal point nowadays, given the "monster". Notwithstanding the tourists it was reported just yesterday that a "Buddhist group" are proposing to build a retreat there. It's the same mob with the commune in Eskdalemuir, the one that "anti-independent-Scotland", David Bowie, used to affiliate with. The Starman and Scottish Independence

On 13th March 1996, Thomas Hamilton, allegedly single handedly, undertook the Dunblane "massacre". It is alleged in some quarters that Hamilton had friends in high places.

Tennis player, Andy Murray, was at the school at the time. 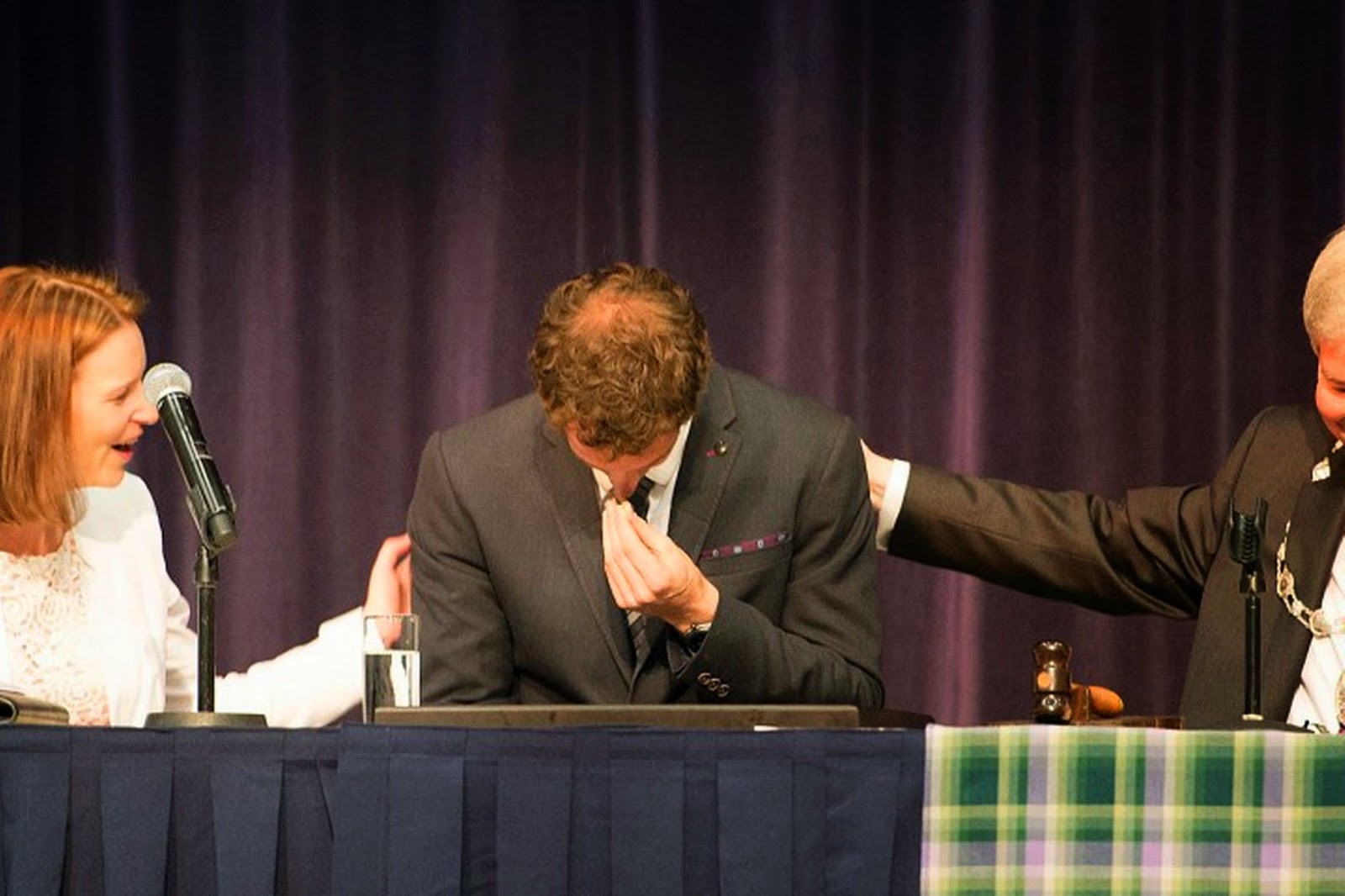 I wrote about Glasgow's Red Road flats recently, in respect of their intended symbolic demolition as part of the forthcoming Commonwealth Games opening ceremony. Quin Towers

The intended spectacle was recently announced as being a non-happening. It was a Sunday, 101 days prior to the anticipated event that the announcement was made. BBC

Andy Murray received the "freedom of Stirling" this week. He broke down in tears.

Going back to Crowley and his Egyptian connection, one should perhaps consider why the Stone of Destiny was left, after alleged repatriation from the "English" - by a gang of law  students  on Christmas Day 1950 - on 11th April at Scotland's "home of independence", Arbroath Abbey. One might also consider that the stone had been missing for 108 days, an ultra-important number in Buddhist, and others,  circles.

The Stone of Destiny is allegedly Jacob's "Pillow Stone", brought to Scotland by Egyptian princess, Scota. All recent United Kingdom monarchs have been, ritually, crowned upon it. It is more than likely the next will too, although this time in Scotland.

There's been a plethora of stories about Loch Ness recently in the media, whilst we have the independence referendum coming up, golf's Ryder Cup, the Commonwealth Games, and BBC's "Big Weekend" - reported yesterday to include Coldplay. One can safely say that Scotland is likely to be a focal point, with resulting "energies", this year.

Posted by Newspaceman at 17:40 No comments:

From Peaches to Pennsylvania

According to yesterday's mail on line - How Peaches Geldolf was obsessed with the occult - her father Bob's new girlfriend claimed that neither she nor Bob knew anything about the OTO "cult", and would have thought it was a fad that would pass if it was not for Peaches' tattoo.

Here at newspaceman we have our reservations about Bob's knowledge of the Order.

Back on 13th July 1985, Saint Bob organised the twin Live Aid concerts, one at Wembley, the other at the JFK stadium in Philadelphia, Pennsylvania. From Led Zeppelin, Portraits Introduction :

Late in the spring of 1985 came some surprising news: in a musical year full of dream pairings and matchups inspired by charity, musician/organizer Bob Geldof had secured one of his biggest coups. Plant, Page, and Jones would perform again at July’s Live Aid concert in Philadelphia accompanied by bassist Paul Martinez and drummers Phil Collins and Tony Thompson

As is well documented, elsewhere and previously here, Jimmy Page was great admirer of Aleister Crowley, so much so that he purchased "Crowley's"  Boleskin House on the banks of Loch Ness in Scotland. Crowley considered Boleskin to be the Thelemic Kiblah and the focal point of the "magickal energies of the Aeon of Horus". (wiki)


Occultist and great friend of "royalty", John Dee, is the founder of Enochian magic which, to all intents and purposes, is the medium of conversing with alleged "spirits and angels" :

The Enochian system of magic as practiced today is primarily the product of researches and workings by four men: John Dee, Edward Kelley, Samuel Liddell MacGregor Mathers and Aleister Crowley

In 1904, Aleister Crowley visited Egypt. It was within the Great Pyramid that, utilising Dee's Enochian magick, he composed his Book of the Law, with help from his wife Rose and an entity/spirit/voice named Aiwass. It was on Peaches death day - 7th April - that "Rose gave Crowley his instructions—for three days he was to enter the "temple" and write down what he heard between noon and 1:00 p.m". Crowley thus "wrote" his book on 8th, 9th, and 10th April. The police were called to Peaches property at 1.35pm. Today, it is reported that the autopsy is "inconclusive".

We noted Bob Geldof's views on "the law" in our last post.

Today, 9th April, is the anniversary of the midpoint of Crowley's writings. Today saw a mass (22) stabbing in Franklin Regional High School, Pittsburgh, Pennysylvania. A Disney Dreamworks movie, I Am Number Four, was filmed at the school in 2010. It was based on a book with the same name. The sequel to the book was called The Power of Six. 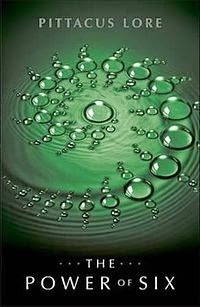 Note - due to lack of time I cannot write about Disney and it's alleged connection to mind-control programs and suchlike.

Note too that John Dee advised Queen Mary on her coronation date, utilsing Hermeticism and suchlike, the date chosen being 1st October 1553.  Note that April Jones was snatched from outside her home on the same date in 2012, a Mark Bridger later convicted of her murder. Led Zeppelin and Jimmy Page have strong connections with the area. See A bridge too far and links within to Loch Ness.
Posted by Newspaceman at 18:52 4 comments:

We have mentioned and perhaps enjoyed Marilyn Manson very recently in regard of the digits 11 and 22; paying respect to James Shelby Downard and his JFK -  KK/33 essay on our travels. (here and here)

Peaches father never liked Mondays, that's how he made it big.

"Yates contended that Geldof had repeatedly said, "Don't forget, I am above the law" - wiki - Hutchence death

Michael was found dead on a 22/11, in Oz, allegedly unintentional suicide.

An oldish-baby arrived today in Oz,  whilst an nurse allegedly killed herself just after his birth, allegedly due to an Australian radio show hoax. It's 259 days since George was born, in pregnancy terms that's the commencement of "full term", when the waters break.

Peaches -  born exactly seven years prior to the Dunblane massacre - Geldof, sported an O.T.O. (Ordo Templi Orientis) tattoo. Scotland loving, Aleister Crowley, and "his" "do what one wilt be the whole of the law" dug the OTO. (here)


We touched on potential "year and a day" magick in the very recent Marilyn Manson / Clutha Bar related post. (here)


Yesterday, 3/4,  it was announced that the Glasgow XX Commonwealth Games are to start with a bang, five large tower blocks - The Red Road flats - are to be demolished as part of the opening ceremony. (here).

The date is 23rd July, allegedly a year and a day after royal baby George's (Pythagorean 22/7) birth, whilst the games last for eleven days.

Apparently,  the destruction of the towers is seen in some quarters as "a bold and dramatic statement of intent from a city focused on regeneration", although others disagree.

It's also well worth noting that Prince William and Kate visited Glasgow exactly  364 days prior ( a year less a day) to yesterday's announcement, on 4/4/2013, when they saw mascot Clyde and played table tennis. (Masks)

What to make of it we really don't know,  but for sure, watching those towers collapse will have some sort of effect on the collective psyche. 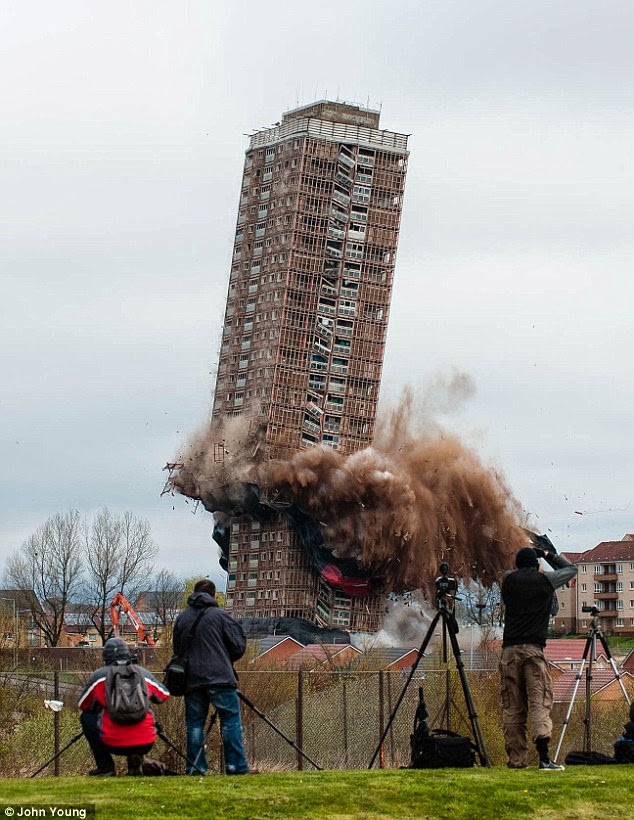 P.S- Today it is reported that a "large expanse" of mystery foam has appeared on the Clyde. here.

The whole world in "our" hands 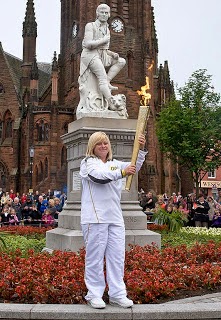 We noted Elvis - The King - Presley's alleged only UK "visit", to Glasgow's Prestwick Airport on 3/3/1960 back in May, whilst Robert Burns pops up fairly recently here given his "masonic" connotations. Probably the most obvious symbol of the ongoing importance to the poet's craftwork was at last year's Olympic relay, when on day 33 the torch snaked back in to Scotland, to leave from the Burns statue in Dumfries on day 34 for a 121 mile journey back south of the border. As noted often, 33's are important, as are double 11's, and 121 is 11 squared. It's also worth noting the solar symbolism, given that the date was 21st June, Prince William's 30th and the sun drenched summer solstice. Fruit for Thought


Today it is reported a "plea" is being considered to rename Prestwick to Robert Burns Prestwick Airport and no, I don't think it is an April Fool although the media this year appear to have concentrated on spoof Scottish independence stories for whatever reason, make up your own mind and bear in mind a forthcoming global society. (BBC)

Also worth highlighting is tennis player and Dunblane massacre survivor, Andy Murray, and his new hotel in  Perthshire. It was purchased from the Eden family and has bedrooms and suites named after famous Scotsman including Robert the Bruce, William Wallace, Sir Alex Feguson, Sir Chris Hoy, and Sir Sean Connery. Maybe there is little else to write about it, but the mail on line closes it's article with a picture of the chess board in the main lounge and captions it as such.

To close, given the references to the number 3, it is worth noting Prince William and Kate's at-long-last photographic appearance on Mother's Day with Baby George, the date 30/3, 8 months and 8 days since we last "officially" saw him.

Also note from  today the criticism of the Government's sell off of Royal Mail; apparently there is anger in some quarters that the shares were priced too low, @ 330p, when offered. BBC