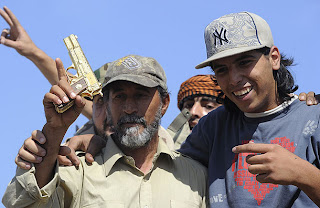 Being quick here, it's late, note the chap's attire (above), Mohammed El Bibi - the man who allegedly killed Gaddafi, especially the New York Yankees baseball cap and striking tee shirt, then note the similar NYY headgear of John Clark Wilson, the man who attacked Neil Lennon, the Celtic manager, at a football game last May; an incident with severe ramifications. 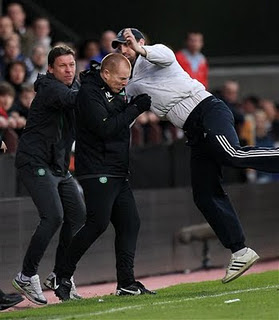 Remember, it was Celtic, playing away, at Hearts.

Lets not mention a golden gun would be rather heavy.

Note my last post, given the Yankees are nicknamed the Highlanders.
Posted by Newspaceman at 21:55 10 comments:

Revelations: "and the dragon gave him his power, and his seat, and great authority". 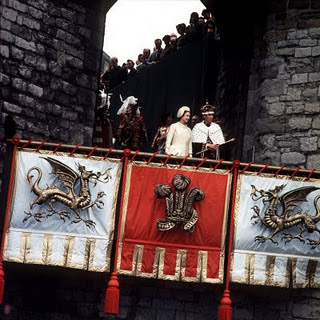 Saturday past saw Prince Charles up in Aberdeen, unveiling a statue in honour of the Gordon Highlanders, a now extinct British/Scottish military regiment, originally founded as the 100th Regiment of Foot, to fight the French in the revolutionary wars. Charles is, of course, Prince of Wales, the image above from his investiture at Caernarfon Castle. In the middle of the two dragons, on the plume, it states, ich dien, or I serve. 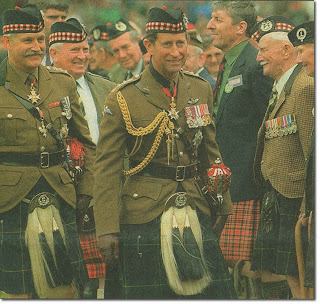 Meanwhile, Saturday past down in London, a Welsh Dragon flew over number 10 Downing Street; reason being that Wales were playing the French at rugby.

Again Saturday, over Europe, indeed globally, demonstrations were being held to oppose the "elite" rulers of our globe. There did'nt seem to be any mention of royal families, rather the bankers seem to be the target of the (alleged) militants. Rome got it tight.

Sunday 16th saw the anniversary of the death by execution of cake-famed Mary Antionette, daughter of Francis 1st, Holy Roman Emperor. Wikipedia notes that "some academics and scholars have deemed her frivolous and superficial, and have attributed the start of the French Revolution to her". She comes from the infamous House of Lorraine, the same royal family who spawned Mary Guise, mother of also decapitated, Mary Queen of Scots (MQOS), and thus grandmother of James 6th & 1st, United Kingdom unifer and Bible reviser/promoter. Something we go on about a bit here, given Princess Diana, William, and rituals.

Personally, I think we can link these matters together by means of the classic film, Carry on up the Khyber. In it, we travel back in time to colonial India (although it was fimed in Wales), and view the antics of the Scottish 3rd Foot and Mouth regiment - the "Devils in Skirts" - as they attempt to contain a revolution; a battle eventually won by a unified lifting of the kilt, exposing their snakes, thus terrifying the native enemy away. 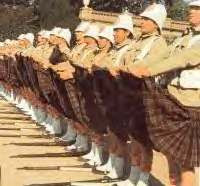 wiki- Carry on up the Khyber.

Posted by Newspaceman at 17:07 No comments: