It was Fiona Bruce in the studio on the BBC News at 10 last night, again the leading story was that of the foot and mouth disease. We are now being told that it is highly unlikely that the virus was transmitted by water or wind and that it appears that the outbreak was caused by human hands, perhaps maliciously. Images of carcasses of cows being loaded into a truck were shown; these were the remains of a second cull which has been carried out.

It now appears definate that the source can be attributed to the Pirbright research site, although there is still some debate over whether it is either the Governments Institute for Animal Health or neighbouring company, Merial (Me-liar?), who are to blame. We were told that it seems likely that it was Merial as their operation was still suspended last night whilst the state function had reopened. 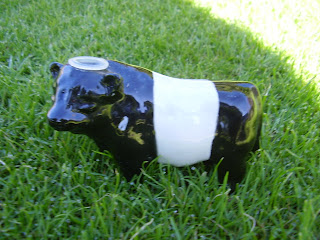 We heard of a "darkening mood on farms nearby" and went to see a farmer, John Gunner, who was both devastated and angry. Furthermore, "riflemen have packed away their guns" and images of them walking through a stubble-field were shown. Over we went to reporter Jeremy Cook, "deep in the protection zone" as we heard that "the countryside is closing down". A brief interview was held with another upset smallholder, some images of healthy cows and pigs were shown and then we saw a cheesemaker briefly questioned.

Black and White ?
Fiona herded us over to Downing Street where reporter Laura Coomsburg told of a collective ministerial "sigh of relief" as Merial seem to be getting the blame and from there we went to chief scientific reporter, David Shukman, who told us again how farmers are aggrieved but he didnt really know much more about how the virus has spread.

Missing Madeleine was the next topic as we heard more of about the bloodstains and of "questions at the heart of this enquiry." Apparently, the Portuguese police have told the BBC that "there are some indications against the abduction theory" and we saw this put to the McCanns at an interview. Perhaps tellingly, the BBC referred to Mr Murat as the only named suspect, yet on Sunday he was referred to as the only suspect and on Monday, as the key suspect. We closed by being told of one "new piece of news" - the bloodstains will be analysed at a British laboratory.

Coming up - Why our children are not making the grade.
First though we heard of a journalist, James Miller, who was shot by Israeli forces whilst filming in the Gaza. Images of his death were shown, although it was night-time and really only a solitary gunshot was heard. Mr Miller was "unlawfully killed" yet the Israeli government seem unwilling to progress any investigation into their soldiers conduct. Mr Miller's mum was interviewed, we heard of her despair. Images of Israeli troops were shown.

Guantanamo Bay and our Government have requested that five former UK citizens, who are currently detained there, are released.

Back to Iraq for a story regarding Iraqi interpreters and their desire to begin a new life in this country after helping our military in the ongoing conflict. We heard how they feel that their lives will be in danger if they remain in Iraq, hence their pleas for asylum. Apparently, there could be as many as fifteen thousand of them.

Gang Gun Crime - we heard how Jesse James was "left to die on his own - like an animal." and his mother told how he refused to join a gang and that was the reason for his murder. Are cows animals ?

The promised feature on education next as we were told of "children falling short" - 4 in 10 have not mastered the basics at aged 11. Images of pupils at school were shown, the Conservatives consider it unacceptable.

China are hosting the next Olympics, as such we travelled there to see how matters are progressing in this "authoritarian state" where there "is little scope for dissent." The stadium is nearly complete, the trees have been planted and so we went to visit a lady weightlifter who "stopped taking her substances when she grew a beard." The substances seem to have been state supplied and so the authorities appear to have given the unfortunate woman a launderette and a "new set of memories" in order to compensate for the facial hair problem. We saw the next generation of Chinese athletes, infants, "already on the rack" - in a gymnasium. Preparing for 2012 we were told. 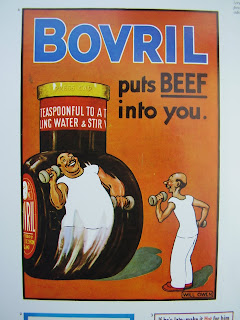 Great reporting as usual, Perhaps the Manchester gangs can be employed to shoot the cows for not being gang members, and once thats done the Chinese can hire them and Merial to cull Western reporters. I suppose the lack of dissent in China is due to that country's new measures against Terrorism. Our Terrorism laws of course make one feel safe as repossessed houses.
Do u own some kind of Antique shop or have you cornered the world market in news-related china objects?

Thanks ferrismoon, your comments are appreciated.

A collector - but some of the items pictured are borrowed, for example the KP monks - from e bay - I have a couple of them but a lot of things are packed away.

Hopefully, in the foreseeable, all can be opened and photgraphed, I have a lovely foxes glacier mint glass paperweight in the form of an actual sweetie with the bear etched in the base. Stunning, and only 10p from a jumble sale.

You begin to see it is all animals, children, royalty, military and sex etc that advertisers use (and have used).

These all link to the nefarious world we live in.

thanks again, I have looked at your recent article, it is a bit beyond me but I searched a name and got a link to a book - so I will get there. I had never heard of the other numerical/alpha system before. Still reading BF - getting there

Your Chinese bearded lady description gave me a chuckle, thanks.
I live and work very close to Pirbright. Driving home this evening, I hear on Radio 4 that the ban on animal movements is being lifted from 12 tonight, except for round here.
Also, there was mention of the Chinese Olympic preparations. Someone has criticised the amount of air pollution at the Olympic site. I'd like to see how they solve that one.
Anyway, I'd better go now. I'm dribbling and have some nasty blisters on my feet.
Cheers