We commenced with Hugh on the BBC News at Ten where the ongoing FLOOD CRISIS was still the main headline news. "Running out of water" seemed to be the jist, as such we travelled to Gloucester with reporter Gavin Hewitt to see exactly what was going on.

Waiting, waiting we were told, and we saw images of queues of people. More thirsty individuals were pictured, "searching with containers" during a "day of roaming". An old lady told how she feared someone would be "found, dead in bed". Groups of individuals were "stood on street corners; drawn together by rumours", waiting for the public water dispensers (bowsers) to be filled; perhaps hoping to corner the market, who knows ? 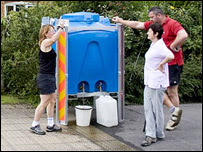 Gavin then decided to check water availability from bowsers; personally. We saw him pictured at a number of these large blue plastic vessels, turning the tap, and shaking his head mournfully when they were found to be empty. He then approached a large throng of individuals, each festooned with numerous empty plastic recepticles and asked them collectively "What are you all waiting for". No response was forthcoming to this obviously ridiculous question.
We briefly turned to yesterdays outrage when it was revealed that certain nefarious individuals were in fact blagging extra supplies of bottled water and were told, that thankfully, a new system has been brought in to eradicate this problem. The solution is simple though, once people have received their allocation, the back of their hands are marked. See the Bible for more on this interesting concept.
Gordon Brown told of his solutions, more tankers, more bowsers and we went to Bristol to see "how people are adapting". Things are pretty grim here it appears, all the pubs and clubs have been closed by Health and Safety. Perhaps because of this we immediately went back to Hugh in the studio and from there to Richard Bilton, a reporter in West Oxford.

Richard introduced us to a elderly lady, Masie, I think her name was, and we saw as her daughter "helps her to escape" from the flood ravaged abode. She was obviously distraught. We were told that hundreds have been moved to safety and we saw a pregnant mother, "stranded in flats". Again this whole business went on and on, we eventually closed by being told of "a surge, flowing down the Thames."
We revisited Hugh in the studio and moved on to heatwaves in Europe. Images of burning woodland were shown and we heard of searing temperatures in Hungary, Greece and Italy. A visit to the Acropolis was next and we saw a thick blanket of smog which surrounds the ancient city. Mention was made of links to global warming.
Suicide bombings are a daily event in Iraq however one yesterday apparently merited further attention as it happened after a football match. We heard of 50 dead, 130 injured and were told that "the American surge has led to a reduction in violence but some insurgent attacks get through."

Back home, we heard from Nick Robinson on the days political events which appear to revolve around our security. Images of the recent London and Glasgow terrorist events were shown to illustrate the constant danger and we heard of a Unified Border Force which is to be established; this, along with biometric identity checks, visas and a 56 day - without charge - detention period for suspected terrorists. Apparently we live in a "brave new world, today".

To further illustrate this global, world concept, our next destination was China where we heard of the "Great Wall of Cash. This involves the chinese investing heavily ("on a spending spree" in Western companies and the example of Barclays Bank was provided. It appears that we are not allowed to invest in China but we wont say no to their money.

Tour De France - "was billed as the clean tour" - now riddled with the taint of drugs. Talk of revolution abounds. 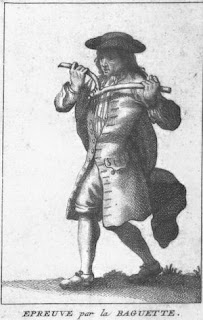