The BBC News at 10 commenced with the decision by wealthy self-made Scottish businessman, Tom Hunter, to redistribute a billion pounds of his own personal wealth to the less fortunate of society via various charities. As such, we saw statistics on poverty and wealth in the UK together with information from the Joseph Rowntree foundation. We are being told that the very rich are getting even richer, although no real solutions were offered to this historical dilemma. 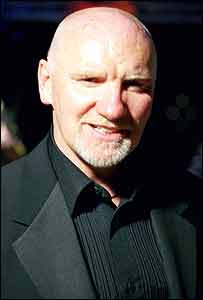 Russia followed and we saw clips of their state television which is apparently "asking the same question as us." That being - how will Russia retaliate in response to the expulsion of four of their diplomats following the Litvinenko "crisis". We are still waiting for the details to be advised and as such we saw various theories put forward as to what might happen and what the possible ramifications might be; especially in terms of Western business who have interests in Russia. Particular focus was given to Top Shop and B.P. Again as yesterday, we saw a reporter, Bridget, at the Foreign Office, again the camera persepective seems to blend her in as part of the building, although they used the right hand arch tonight.

We moved on to George Galloway. He is in more trouble and faces temporary suspension from Parliament over his behaviour when being questioned over his integrity over an Iraq based charity which he was involved with. This photo of an extreme Mr. G. is the one featured on the BBC news website as is the one of Mr. H. 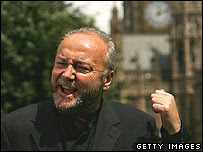 Health was next and again we were told of a shortgage of organs for sick people who require transplants. At present, a donor card is carried which gives permission for one's organs to be removed if one suffers an untimely death - however the plan is to reverse this and make the process on an opt out basis. We were told that only 1 in 4 of us currently have given permission for body parts to be removed and this is simply not enough.

Images of a young girl who has received a heart transplant were shown; she was playing on a trampoline. We saw a baby who has just received a new heart; if my memory serves me correctly, we saw the same baby fairly recently on the news, whilst she was still waiting for a suitable donor to be found. Could there be plans afoot to link organ donation with the new ID card - perhaps another selling point for it?

First though, "a maritime tug of war." This referred to the cargo ship, MSC Napoli, which became stranded off Branscombe in January. At the time, there was high media exposure to this story, as thousands of scavengers headed for the beaches in search of rich pickings which were being washed ashore as the boat slowly shed its load of cargo containers. Attempts are now being made to remove the ship and a controlled explosion is being detonated to try to split the craft in two before each half is removed separately.

This seems to be a big story and therefore we saw the very small explosion from three different angles, including a helicopter view. The BBC had also engineered a computer graphic reconstruction to show us how it would all work. We ran through this before being told the ship would be "ripped apart, like a Christmas cracker." We saw images of the January scavenging and heard from enviro-mentalists, about concerns over oil leakage from the stricken vessel.

Pierre Williams next, charged with killing a lady and her two children, in Manchester

A special report on al-Quaeda in America - We are told that a report has been published which states that al-Q have "regenerated" and are "no longer on the run". This has lead to further fear of another attack "here, in the Homeland"

Over in the Palestinian homelands, it looks like some terrorists have accepted an amnesty. In a place where "poverty peels off the walls," we saw some individuals who have taken up an offer from Israel and accepted temporary detention in a police station. We then saw some other Palestinians; however, these ones were armed and did not seem as keen on the idea.

Back to Blighty where it was time for the promised educational feature. It seems that the generation aged between 18 - 25 were not taught to perform simple arithmetical calculations and so we went out into the street with the camera to question some young passers by on what a eighth of 32 was. Some had no idea, some did. We then went into a classroom of adorable youngsters who were collectively asked the same question. 4 ; they collectively shouted; all dressed identically in pristine uniforms.

The answer we were given as to the reason for this ignorance of basic arithmetic in an entire generation was simple. They had relied on calculators. I was at a slight loss to understand this rationale, given that calculators dont in fact have fraction buttons but I do accept that our educational system is somewhat flawed.

ITN followed at half ten. Again we had Russia and Galloway followed by, coming up - a homemade recording of a suicide bombing on a rally in Pakistan. We moved on to the Napoli, we were told of the "last rights " being given and that "desperate times call for desperate measures." We saw images of the human scavengers from January to illustrate this last comment. This is "the ship that refuses to break up".

On to Organ transplants and then we popped over to Pakistan for the promised footage. We saw a march and heard a bang. Gordon Brown was briefly on and we heard of the Stars in Your Eyes connection to one of the children killed by Mr. Williams - as mentioned above.

Then an advertising graffiti artist. It speaks for itself and I have copied the photgraph and the link. http://news.bbc.co.uk/1/hi/england/dorset/6901543.stm.

We closed with Harry Potter and the Imminent Book Launch.


cheers
Posted by Newspaceman at 06:56