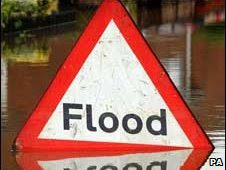 We read from the BBC today of heavy floods hitting the "Kinross, Milnathort and Scone areas", with local councillor and Milnathort shopkeeper, Willie Robertson, commenting:

"It was raining like I've never seen in my life before, it was just torrential rain," he said.

From wikipedia we note the "rich history" of Willie's small village (we will forget Scone and the Stone of Destiny for the moment):

.. the town is perhaps best known for being the closest town to one of Europe's biggest music festivals, T in the Park, which is held annually at the Balado airfield.

Settlement in the area can be dated as far back as 2000BC, with two Neolithic standing stones being nearby where human remains were found and dated.

There is another nearby medieval castle on an island on Loch Leven, the infamous Loch Leven Castle. This castle is known to have been visited by Robert the Bruce in 1313 and 1323, but is perhaps most famous for the imprisonment of Mary Queen of Scots in 1567.

We have of course commented on Mary, Queen of Scots, very recently (the lady who got her head chopped off in three hits) in connection with Craigmillar Castle, however what also jumps out from the on-line encylcopedia entry is that:

On 13 December 2006 heavy rainfall caused the Back Burn, which runs through the centre of Milnathort, to burst its banks. This led to flooding, and some residents were temporarily evacuated from their homes.
December 13th of course being both St Lucy's Day and the date of the signing of the Treaty of Lisbon.
Since posting this, it has transpired that the town of Cupar has also been badly hit. The image below is of the carnage. Regular readers will remember Cupar from my 18th June post, Talking heads, when I noted the baby badger saved from a storm drain in Ceres Road. 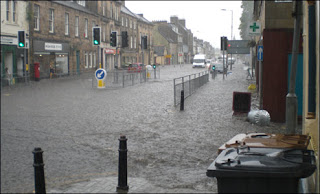 Strangely enough my son told me that he reckons we had the worst rain & hail storm ever in Auckland yesterday - it only lasted a short time but he said it was fierce. I work 20 minutes drive from home & never noticed a thing. Yet later I found large clumps of frozen hail outside my back door, I've never seeen anything like that before in Auckland.

Cheers Alex, maybe something to do with the solar cycle and the full moon/eclipse.

This link is of medium length, but if you are interested in the story behind the flooding. There are other documents etc online but if I place them here the comment might be rejected as spam.