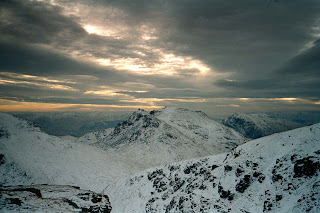 Perhaps no surprise, given the content of other recent posts including Crowley, mountaineering, the herding of humanity and the forthcoming return of King Arthur, that today a RAF Tornado F3 jet crashed, sadly with the loss of two lives, "on a hillside near the Rest and Be Thankful beauty spot in Glen Kinglass, near Arrochar, at about 11.45 BST".

From the same BBC report, we note that the two military crew were from 43 Squadron and that "the Rest and Be Thankful is a tourist spot on the A83 Arrochar to Inveraray Road, north west of Loch Lomond." 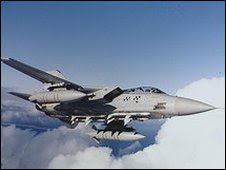 From wikipedia we note that historically Viking festooned Arrochar - pronouced Arrow-ka and located in the peninsula of the ultra remote Cowal - is overlooked by a group of mountains, "in particular" the distinctive Ben Arthur, or Cobbler, nicknamed due to it's resemblance to a shoemaker, bending over his last. (getting shafted maybe?)

From the same source, on the A83, specifically the Rest and be Thankful, we glean that:

Rest-and-be-Thankful are the words which are located on a stone near the junction of the A83 and the B828, placed there by soldiers who built the original Military road in 1753, which is referred to as the 'Drovers' road'. The original stone fell into ruin and was replaced by a commemorative stone at the same site.

A drovers road being a route used to transport livestock.

cheers (will try to edit/expand later)

see also my post from last April, Leuchars in the Sky for Di's Son.

Posted by Newspaceman at 17:05

Noticed the Beale bit in the last post. The Beales were cousins of Jackie Kennedy and feature in a famous film for their run-down house

Edie Ewing Bouvier Beale.
Have been following the train tracks so cheers for linking to that train story.
U may have noticed the story about a python in Florida strangling a little girl named Hare [ today Gone Tomorrow]

Never noticed the python story, really only look at the news here and the main headlines. Will check it out though.

I wrote about snared hares, Royalty and Cawdor (macbeth) last year, I should really have checked it in conjunction with the badger story.

Will give you a shout if I get any train tales,in fact check my next post and the link to the snla, they claimed responsibilty for an "accident" on the West Coast line in Penrith, a couple of years ago.