A kwik fit up; an ongoing hoodwink. 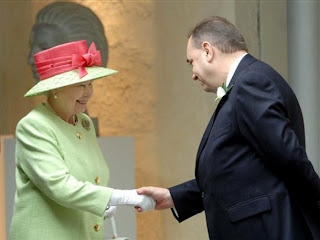 Matters progress in the same previously noted manner as we note the visit of her Majesty to the Holyrood based Scottish Parliament to celebrate the 10th anniversary of Scottish devolution which came into effect on 01/07/1999. She was greeted by the 4 leaders of the "main political parties" and 143* children who were celebrating their birthdays today. Like it's 1999.

An interesting quote from the BBC report about the event (bearing in mind recent posts):

Outside the parliament, Colin Williamson, 38, from Edinburgh, said: "Every time I walk down the Royal Mile, I bump into someone famous.

"Last week it was former Rangers player Arthur Numan and later we met Oasis in the pub - and today it was the Queen. It doesn't get much better than that but to be honest I don't know much about the parliament. I don't really follow it."

You have to wonder if they make it up. (King) Arthur Nu-man. 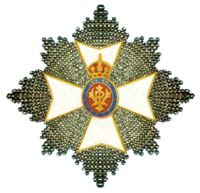 A rape in a portable toilet at the Young Farmers Ball, Royal Bank of Scotland sponsored-Royal Highland Show, Ingliston, on Saturday night. Surely a beast at work.

"The number 28 is one of the correspondences of Solomon in kabbalistic numerology ; the Solomonic name assigned to 28 is "Beale." ** (important)

It is a prime tenet of Masonry that its assassins come in threes. Masonic assassins are known in the code of the lodge as the "unworthy craftsmen." Because Masonry is obsessed with earth-as-gameboard (tessellation) and the ancillary alignments necessary to facilitate the "game," it is inordinately concerned with railroads and railroad personnel to the extent that outside of lawyers and circus performers, no other vocation has a higher percentage of Masons than railroad workers. "

Let's just flash back to the Scottish Parliament shindig:

"Only about 84 of Scotland's 129 MSPs turned out to watch the anniversary event."

Continuing with railroads: again from today we read of how the East Coast Line is to be state-run, by order of Scottish Prime Minister, Gordon Brown(BBC report):
The government says it intends to take the East Coast rail service, run by National Express, into state ownership.

Just like the rest of us it seems.
It's surely time to start reading between the lines.
cheers
*143 is also an interesting number, the sum of both 3 and 7 consecutive primes whilst divisible only by 11 and 13. 11 is important, think the finishing times and dates of the 2nd World War; 13 - you should know the score and it's nothing to do with luck.
** I was unsure about the Beale aspect so did a search on the BBC site.(link). On 29/06/2009 (adds to 28) - last Saturday - 13 people had to be treated by paramedics after a steam train crashed on a narrow gauge railway on the Beale Railway, Beale Park, Pangbourne, shortly after 13.00 hrs. There is a Falkland War memorial chapel in the village, opened by the Queen on 03/2000. It appears she regularly visits it.

2nd top image is Scottish Premier, Alex Salmond, greeting the Queen with an unusual handshake.
Posted by Newspaceman at 18:16

Interesting you should bring up railroads, there have been 2 commuter train accidents in America recently (one in D.C., one in California, east and west, in the D.C. crash a 9/11 researcher was killed), and then after that there was a news report out saying "the accidents should never have happened and definitely won't happen again", they literally shouldn't have happened because the trains are driven entirely by computers. I suspect foul play...

Spot on, I just added a bit about JSD, Beale Railways and an accident on Saturday.

Someone is telling us something.

Couldn't help but think of Christian 'Bale' when I read 'Beale' - his friend Heath Ledger died at 28.

Hiya Anon, it was not me that said it, I was quoting Downard.

As regards the your first link, is that not society part of the ongoing conspiracy. I wrote about Alice Bailey last December - she received "messages" in her sleep, her husband was a top level freemason.mmm

Alex, cheers, will re-read your post from June as recommended, on the subject of Beales and actors, what about East Enders, the square and all of that.

Thanks to you both.