Do as thou Wills 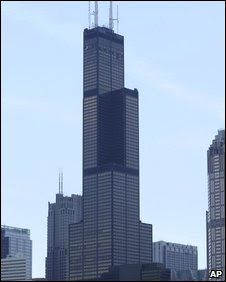 From Fritz Springmeier's - The Black Nobility:

The 13th bloodline has kept its genealogies very secret. I would welcome more input from informed persons about this bloodline. The tribe of Dan was prophesied to be the black sheep of the nation of Israel which would bite the other tribes of Israel. The tribe of Dan had the snake and the eagle as its two logos. The tribe of Dan left its calling card all over Europe as it migrated west in the names of many places.

From the BBC today, Chicago's Sears Tower to be renamed:
The Sears Tower in Chicago - one of the most famous skyscrapers in the world - is being renamed.
The 110-storey structure, which opened in 1973, is being rechristened the Willis Tower on Thursday.
From wiki re Illinois, where the "Hog butcher for the World" - Chicago is located Posted by Newspaceman at 18:19

spot on! do as thou Willis the whole of the law

dan is indeed represented here, poison comes in many forms

the building's got the whole kaaba-monolith sheen goin on.... tres black madonna-y

Thanks Ray, I read your post before but have little idea of America, so it did not sink in.

Nice.. Until now we had William (Will I Am). Now we have the confirmation (Will Is)