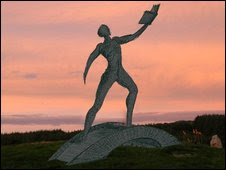 This weekend sees another happening in Bonnie Scotland, an outdoor music festival called Wickerman, held in prime bovine "grazing ground" close to Dundrennan, and named after the 1973 movie ,The Wicker Man, seemingly because the locality was "inextricably linked with various locations used within the classic British horror film."

One of the highlights of the festival, which this year includes the Human League, Zion Train and the Magic Numbers on the main stage, is the burning of a giant wicker effigy, in this instance, Robert Burns, in celebration of his 250th birthday anniversary and of course Homecoming 2009. 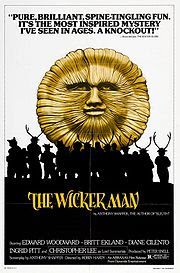 Given my musings in yesterday's post re Bible alterer, James Charles Stuart, and his mother, Mary, Queen of Scots, it should be noted that Dundrennan Castle was where she spent her last ever night in Scotland, afterwards being captured and taken to England for execution by decapitation where, it is said, it took three attempts to sever her head completely.

The film the Wicker Man is also interesting, basically revolving around a community of "Neo-druids" who believe in reincarnation and worship the sun, whilst engaging in occult rituals and magical practices in order to appease natural forces. 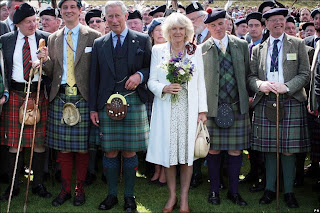 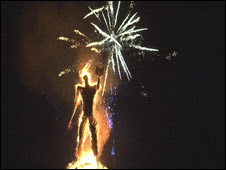 A trinity hides in the original Wickerman movie -
Edward Woodward [ 'ed wood wood wood] , guess u may know it

Not got a scooby aferrismoon, never seen it.

You started the Grants yet ? Seemingly over here, there is a big clamp down on teachers presents, alchol is a no no.

I meant the Trinity is Edward Woodward , the man with 3 wooden heads, its a shite joke.

Give the alcohol to the postman

Alcohol is ever present here. You're not really allowed not to drink.
Not started it yet , will wait for a night with some mates and watch a film.

Saw this great film, u may enjoy called Kin DzaDza, its russian.
Download one with good subtitles but its definitely a change from the same old stories of schoolboy magic and the rest


cheers [ but its beer this evening]