Huw Edwards was again our host on the BBC News at 10 and again the first story concerned the ongoing tension in Burma, where, yesterday, matters escalated and violence was used by the "military government", in an attempt to quell the unrest.

We saw images of this, Buddhist monks and civilians, at first "openly defying the military", then running for their lives; gunshots could be heard and clouds of tear gas seen on a mobile telephone video recording which had been surreptitiously taken, no foreign journalists being allowed in the country. An eye witness told how when the monks were at first challenged by the authorities they simply recited prayers. A burning motorcycle was also displayed - believed to belong to a police informer. An street map was provided in order that we could follow proceedings, and we were advised that when protestors reached the British Embassy, they stood outside and cheered although no reason was given for this puported action. To close this section of the report we saw a Burmese blogger - it appears that they are telling the truth of the situation to the outside world, via computer.

We moved on slightly to an analysis of General Than Shwe, the leader of the ruling junta and an expert in "psychological warfare". However, we were told that he is "superstitous, regularly seeking the advice of astrologers". Claims were then made of his involvement in global marketing of drugs although no examples were given, before we viewed images of a new capital city being built soley for the ruling classes and were told by reporter, James Robbins , "what better symbol of how distant, how estranged, this government has become." We closed with talk of UN involvement.

Let us look at this reporting. It is almost implied that this type of controlling government does not happen here. Yet, only a few months ago, a Hindu sacred cow was slaughtered, hundreds of riot police helped to capture the animal despite monks and prayers. We regularly hear how most of the information available on the internet via blogging and suchlike is nonsense, yet we are encouraged to believe it in this instance. Astrology is claimed to be a superstition, yet anyone who has scratched the surface of this subject knows that it is far more than that, it has simply been degenerated in "our world" - predictions being made only on sun signs, which, to be honest, is not even 0.1% of the subject. And, finally, we hear that a new capital city is being built whilst the majority of the Burmese live in squalor and poverty, thus implying our social structure is overwhelmingly different. Is it, if you think about it and open your eyes ?

We moved on to our Government and were told that Gordon Brown "refuses to be drawn on an early election", is "deliberately shaking off ties to Tony Blair" and comparisons were made with him and Lady Margaret Thatcher. Again we heard Gordon's plans for a "stonger, fairer Britain" and "shared values". See Huxley's Brave New World, or Orwells 1984, for more information on Gordons long term objectives.

Madeleine McCann folloed after a tourist took a picture in Morocco of a young blonde gir who some believed may be missung Madeleine. Journalists investigated and found the girl was not in fact her, it only seemed to take them a few hours to discover this.

A long feature on allergies followed as it seems the UK has one of the "highest rates in the world". We saw some victims interviewed and heard of possible causes, "lack of exposure to bugs when young", mollycoddling in other words, "poor diet", junk food, chemical additives and "pollution" which curiously was far worse historically. However, it seems that there are a lack of allergy specialists in the UK and more are required to combat this "21st century epidemic".

GMTV, a morning television show, has been fined 2 million pounds for indulging in nefarious telephone phone-in quiz practices. It seems that many competion entrants were not included in the final prize draw after paying up to £1.80 to enter.

Zimbabwe, more on the ongoing situation, it seems that President Mugabee is beginning a process to transfer foreign businesses to local ownership. Again we were reminded of the presidents inherent evil, badness oozing from every pore of the man, it appears.

Next up was a disturbing feature on the number of American soldiers who are developing mental problems and comitting suicide on return from military action. We saw on one such chap, Private Sam Ross, who was now in the case of the Mayview State Hospital in Pittsburg. Sam had returned from actions as a "war hero", blind in both eyes and with other horrific injuries and told how he had tried to kill himself 18 times, methods included hanging and overdose. It was obvious that he was on vast quantities of medication in order to calm him down and was revealed that he had burnt his parents house down. Sam then rolled up his trouser leg for the camera and showed his artifical foot and calf, this is taken from him at night, in case it is used as a weapon.

Some statistics were then provided, last year 98 American servicemen killed themselves, although 1000 attempted to. We heard of links to post traumatic stress disorder and interviewed a Doctor of Suicidology, I kid you not. We turned back to Sam to hear of his Jacob's Ladder style dreams, it appears the smell of burnt flesh lingers in one's mind (a bit like bacon to a reformed vegetarian) and to close we saw an image of the old Sam, resplendent in Army uniform and the new Sam, shuffling round a gymnasium, barely able to function. They didnt say if he had any nephews.

African floods then followed and our reporter Will, another Ross coincidentally, had visited Togo, one of the "poorest nations on earth" where locals live on 50p per day. Countless images of starving and malnourished children in a hospital were shown, fears are that this will get worse due to the adverse weather. We went to a remote village, to hear more of possible food shortages and to view the flooding. Curiously, we saw native children playing in their "new swimming pool" created by floodwater one would assume and therefore temporary. Yet the native children, who I would not describe as thin, were wearing swimsuits.
To close was climate change, again this was blamed on excess CO2 and we heard of a new plan to attempt to negate the gas in the atmosphere - a system of sucking algae from the bottom of the ocean and dropping them at the top, the theory being that they will absorb carbon dioxide on thir way back down. David Shukman, the BBC science editor told us more of this "engineering on a global scale" and interviews with two professors were shown, one enthusiastic, the other warned of the potential ramifications of tinkering with an eco system.
cheers 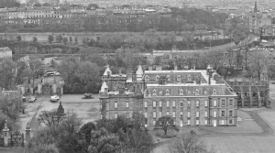 Holyrood Palace, Edinburgh - One of her Majesty's holiday homes 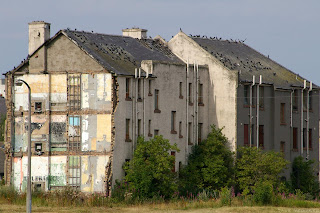 Niddrie, just over the Queens Park .

How distant, how estranged ?