It was Huw Edwards again on the BBC News at 10 where we commenced with economics, the Northern Rock, a major mortgage provider in the UK, has been given "emergency financial support" by the Bank of England.

We were immediately reassured that NR was "solvent - dont worry", however it appears that they have "run out of cash" to lend because "other banks are scared to lend to it". Furthermore, "Northern Rock is no pebble". This matter is being blamed on the backlash over the American sub prime market which has meant that it is more difficult to borrow money.

We were told that "fear stalks the market", however can apparently be slightly reassured because Mervyn King, governor of the Bank of England, has previously advised that they "would only supply finance when they believed problems were exceptional and not likely to last too long." Additionally, the Financial Services Authority and Goverment Chancellor, Alistair Darling, have both agreed the lending facilities should be granted in this instance. The upshot being that there is nothing really to worry about but we shall see.

We moved on to motor racing, Formula 1, and the McLaren team, led by Ron Dennis were fined $100 million plus had all points deducted from the constructors championship because of "secrets, stolen and exploited" from rivals Ferrari. We heard of "acrimony and supressed anger" and that Ron "seemed shocked and emotional" before we heard from Jackie Stewart for his views on the matter to close.
Political editor Nick Robinson was back for the next feature, that of Baroness Margaret Thatcher's visit to Downing Street to meet Gordon Brown. Nick asked what was more shocking, the visit or MT's pink dress before he shouted across the street at the pair, - "Lady Thatcher, is Mr Brown your natural successor." No reply seemed to be received and Nick told how this meeting could appear to be a dig at David Cameron.
We then cut to David Cameron who was visiting a popular London nature reserve to outline the Conservative party's green proposals. I am unsure of the exact location, but we saw ducks and suchlike and the backdrop appeared to be a giant pyramid structure. Anyway, David and Zac Goldsmith told of their quacking plans to save the world and, perhaps more importantly, get themselves elected.
It was time to discuss politics and the "left, right spectrum". It seems that half of the general voting public say that their personal views are right in the middle of the two and these are the people that Cameron is targeting. To close, we saw Thatcher leaving Downing Street and Nick confided that she was a "fragile and sometimes lonely old lady."


Police have killed two men engaged in an armed robbery on a cash delivery van in Chandlers Ford, Southhampton. Images of the scene were shown along with some eye witness reports and interviews.

Foot and Mouth disease followed, the new outbreak is in fact the same strain of virus as the recent cases and we travelled to Egham (someone playing games ?) to see dead pigs being bulldozed into a lorry. Then we saw dead cows in a field before witnessing a farmer, close to breakdown. Again we ran through the possible causes; carried on a vehicle?, carried on a sheep?, no one knows.

Images of a deserted livestock market were shown along with some healthy sheep in which cannot be transported at present before we were warned of "massive economic effects" and a possible "shortage of lamb next spring." We closed by being shown more culled animals being driven away for disposal as we heard "are current rules tough enough - if the virus is still on the loose"

Coming up - Kate and Gerry McCanns personal belongings and Zimbabwe.

First though, we were told that George Bush has announced plans to bring home 6,000 American troops before Christmas. We went to reporter Matt Fry in Washington however he did not mention the 6,0o0 and discussed a figure of 25,000 by next summer which left me slightly confused. However Mr Bush has advised "the more successful we are - the more troops can come home." This is motivation for monkeys, sorry.

Attention turned slightly to Abdul Sattar Abu Risha, a Sunni leader who met George Bush 10 days ago and has now been murdered, "probably by al-Quaeda". We heard that he was just one of a number of tribal leaders who have been killed, before we saw an old speech from the American president - "Never back down, never give in, never accept less than total victory." It seems though that George will resign in 2009, leaving the Iraq problem for someone else to deal with. Nero fiddled....

Experts (no definition provided) have urged the UK government to get some astronauts trained up before 2015 or "we will be left behind in the space race". Images of space were shown, undefined obviously.

McCanns as promised, again very little actual news, only speculation and rumours. It seems to me though that the family are now mainly concentrating on proving their innocence. We saw images of a staged photoshoot from the previous day.

The inquest into the death of a 21 year old from heroin abuse has been halted for a second time after new witnesses came forward.

To close, again as promised, Zimbabwe. This is not the first feature we have seen and was similar to previous. Malnourished infants were in abundance - the "pictures Mugabe does not want you to see." Our reporter, (banned from the country), told how she sneaked in, carrying six or seven fuel cans on the back seat of the vehicle - as "there is none there". Curiously, we saw images of several other vehicles - press ? We heard of slums, sewage, cholera, Aids and malnutrition before we travelled to the sorth of the country where it appears that the locals live in luxury, almost like "colonial days" we were told.

Huge luxury mansion houses were shown, with lawns and sprinklers, these are the abodes of Mugabe's family and friends we were assured. To close this feature and the programme we returned back down south, to see locals scavenging through skips for food and carrying bags and buckets - "in case anything turns up" although, "it rarely does". 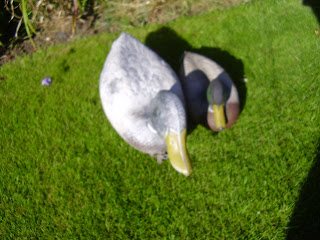 Got round to the Portugal photos article - thanks
Pretty strong stuff, lets hope someone officail can do something half as good. The net-widening aspect of this case will attract the European fisheries quotas people's attention no doubt.

I enjoyed its logical basis of working.