"HI HO, hi ho, it's off to work he goes... First Minister Alex Salmond looks just like one of the Seven Dwarves as he visits the Tunnock's factory yesterday."

Which may all sound irrelevant. However when one thinks about the global society we live in - the banking systems, the golf, the television, the telephone, America, indeed freemasonry, indeed Albert Pike - it can be fairly stated that small Scotland forms a substantial part of the backbone. Furthermore, it has an important alchemical (yeah) role in the dissolution of the current United Kingdom and formation of the new, yet to be fully revealed, Global United Kingdom of God, or Zion, or New World Order. The Golden Age. Trust me on that, that's why the Stone of Destiny is in Edinburgh Castle. (On that note, I'll tip 11th April for the Royal Wedding, meanwhile see King Conn from June 2008 re Sean Connery and Salmond) 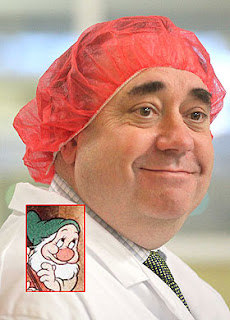 For anyone with a couple of spare minuted, check this short u tube clip of the Disney film. Note the O's (sacks) going into the vault door (a big Z) at 1.49 onwards. Note too that the key is hung outside the door, implying that...

Also, here for Springmeier's thesis on Disney, Illuminati, and mind control. Excellent. I am sure it compares the "witch" to Hekate, although I may be wrong. I don't have time to re-read at present.
Posted by Newspaceman at 09:48

Well , spot on with your 3 definite lines

Hecate - is also known as Chthonia [ of the underground]

Also this from Wiki:

'Athenaeus (writing in the 1st or 2nd century BCE, and drawing on the etymological speculation of Apollodorus) notes that the red mullet is sacred to Hecate, "on account of the resemblance of their names; for that the goddess is trimorphos, of a triple form". The Greek word for mullet was trigle and later trigla. He goes on to quote a fragment of verse "O mistress Hecate, Trioditis / With three forms and three faces / Propitiated with mullets".[50] In relation to Greek concepts of pollution, Parker observes, "The fish that was most commonly banned was the red mullet (trigle), which fits neatly into the pattern. It 'delighted in polluted things,' and 'would eat the corpse of a fish or a man'. Blood-coloured itself, it was sacred to the blood-eating goddess Hecate. It seems a symbolic summation of all the negative characteristics of the creatures of the deep."[51] At Athens, it is said there stood a statue of Hecate Triglathena, to whom the red mullet was offered in sacrifice.[52] After mentioning that this fish was sacred to Hecate, Alan Davidson writes, "Cicero, Horace, Juvenal, Martial, Pliny, Seneca and Suetonius have left abundant and interesting testimony to the red mullet fever which began to affect wealthy Romans during the last years of the Republic and really gripped them in the early Empire. The main symptoms were a preoccupation with size, the consequent rise to absurd heights of the prices of large specimens, a habit of keeping red mullet in captivity, and the enjoyment of the highly specialized aesthetic experience induced by watching the color of the dying fish change." [53]'

A Salmon[d] is red-fleshed fish while Alex sports a red bag on his head. Mullet's are also a hairstyle.

Aug. 13th is the bookies fave for the wedding date.

So I'll go for that

Cheers aferrismoon. Been thinking more about the Walter Scott angle, he wrote Heart of Midlothian just after Rob Roy.

Heart of Mid., apart from being Alex Salmond's football team, is also located in the Royal Mile - the road that runs from Edin Castle to Holyrood (Scottish Parliament/Queen's Palace/Pope visit) . There is a heart shaped mosaic set in the cobbles, locals regularly spit in it, apparently because prisoners used to be kept underneath, in cells, before hanging.

Re the ring - dwarves mine jewels.

Still no more info on the Ross Priory/Loch Lomond thing. I note that one of the miners in NZ is from St. Andrews.

Loren Coleman synchs in with this tidbit:

"A Cowan Shoots A Palin On TV

The head of Ireland (the Taoiseach) Brian Cowen shares a name with the same roots as cowan. One "origin and meaning" of "cowen" is merely another form of "cowan" and means "dweller at the dark hollow."

One etymology gives "cowan" as "hollow in the hill" of Gaelic origin. This would go with the place-name "Glasgow," which means "green hollow."

Watch the news during this full moon weekend for more "hollows" and "beech" names. Will bridges be in the mix too?"

"The man with an extremely Masonic name, Cowan (meaning an intruder, a pretender, and an eavesdropper)".

The mine = the underground, or the subconscious. ZZZ's = sleep. Note the dwarves test the gems they find there, and throw out the red one. Throwing back the red fish.

Spelunking can be dangerous.

What was particularly creepy was that after only getting about 1/2 through it ~ I began thinking that it was actually the 13th full moon that might be of most interest ~ esp when I saw the part about it being on 12/21, and during a solstice cross over. I kid you not that I was actually thinking about the scripture of the moon turning 'red as blood', well before I read the part in the article, of the 12/21 moon occurring during an eclipse, and that it will likely appear reddish.

This is also exactly 2 years before the mayan calendar doomsday stuff.

I've got a verrrrrrrrry ominous feeling about 12/21, of this year folks.

The research I've done in the past year is what led me to recognize this significacnce, when I saw it tonight. I'm very reluctant to give warnings about any particular date ~ mainly because if it proved incorrect ~ then I'd be like the boy who cried wolf ~ and ignored if I truly became aware of important info.
But this date will be significant, and in a negative way ~ I have little (actually no) doubt. I will be asking my mother and daughter to be with me during the night of 12/20 ~ for whatever it may all be about.
Newspaceman ~ you know I've been hanging around here for a few months now ~ even if I do post as anonymous, my writing style is unique enough to recognize. I would love to have to eat my words about this before Christmas ` but i just don't think that's gonna happen.

Michael, thanks for the info, much appreciated

Hiya anon, thanks for the warning, I will bear it in mind.

Todays Scottish News of the World front page headline :I HAVE BEEN TO HELL. Picture of Lisbon torture victim, surname Ross, from Wick. He got body parts chopped off and seemingly distributed as a warning (see Osiris). As such there is a close up of his hand on the front page, he has one digit missing, thus providing the classic pyramid /Spock pose provided and discussed in aferrismoon's last post. Ross as in the terrorist Loch Lomond. Wick as in light/candle/mining ?

I can't get access to the web-site, is pay only.

How tha fuck did ye know where to find my name on a doorway??

Z- language, my mum reads this. I genuinely never thought of the Moon being circular like an O and your Zeds when I posted, but it does seem impressive, retrospectively.