Opium of the Masses 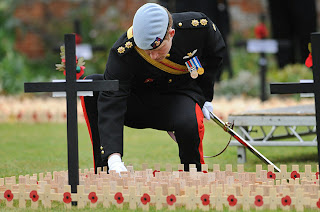 Here in the UK it's our 9/11 with just a couple of days left till Armistice Day.

Initially I thought that the choice of location, Lydiard Park, had something to do with the original owner, Henry St. John, 1st Viscount Bolingbroke, born 16th September 1678. However despite his contemporary influence over the likes of Americans: John Adams, Thomas Jefferson and James Madison, notwithstanding his "Jacobite" persuasion, it appears that the reason for choice of location was simply: "It's because of the proximity to Wootton Bassett". So said Rod Bluh, leader of Swindon County Council. (BBC report)

On the subject of remembrance fields and US presidents, given recent post content it is worth recalling 6/6/2009, when Barack Obama spoke at the American war cemetery near Omaha Beach, France. For that was the location for the famed Omen movie's "Damien" poster, a movie which was released in the UK on 6/6/76, exactly 33 years to the day before the ritual. (Red Hand Gang) 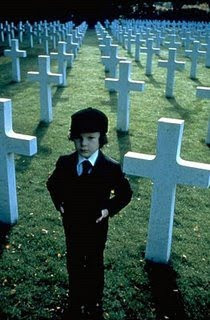 Note the alleged birth date of St. John, recalling the Pope's visit, St. Ninian and, most recently, the 33 beached whales - given a plaque sits at Burtonport, Arranmore, Rutland Island commemorating the landing of James Napper Tandy in a failed attempt to resist rebels on 16/9/ 1798.

The poppy really does take on a more deadly symbolism with their mass crop use in Afghanistan.
Either red or white , the colours of the 'asassins' who resided at castle ALAMUT in or around Afghanistan/Iran

That 'Omen' picture still freaks me out to this day...and NOW!!!!

Quoting Marty..same here. I remember being scared to go to sleep for weeks after seing that movie! Nice catch for the number 33

That huge Jesus they unveiled in Poland a few days ago had this number related to it to, and several other news items I noticed in the last two or three weeks.