On 3/11, Scotland and Dundee United football player, David Goodwillie, was arrested after a fracas in Glasgow's Queen Street, making tabloid headlines. I proposed somewhat jokingly,= that this was in some way indicative of Osiris, who's body, in 14 parts, was allegedly strewn round Egypt; all being recovered with the exception of one - his penis, a replacement being formed from gold.. The slender connection being that a "willie" is schoolboy slang for a penis and surely a golden one would be a good one. As I inferred it was tongue in cheek, as were the references to Stuarts, grail codes, Bobby Sands, hunger strikes, Da Vinci, ET, chicken suppers and suchlike.

Nevertheless, Dundee United themselves are nicknamed the Terrors, their supporters the Arabs, seemingly as their home pitch was, in season '62 -63, regularly ameliorated with sand to provide a playable surface. Originally the club were called Dundee Hibernian, inspired by Edinburgh's Hibernian, or Ireland, and were the "Irish Catholic" Dundee team, replacing a previous, similarly orientated, Dundee Harp side. The club play in tangerine at home, black and white away, and squarely utilise a Rampant Lion (really a dragon) as crest.

On Sunday, Edinburgh Hibernian played city - originally Protestant - rivals, Heart of Midlothian, in the shadow of Arthur's Seat at home ground Easter Road, in the local derby. Hearts won, with a remarkable goal from another David, this one surnamed Templeton (resonating knights), who later set up Stephen Elliot for the decisive second in the 66th. Some crowd trouble erupted, coins - no doubt featuring HM the Queen - thrown. Hibernian, nicknamed Hibs, or the cabbage and ribs, originally utilised a harp badge. 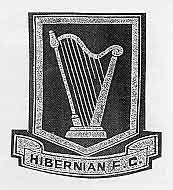 Sunday too, saw the reports of beached whales in Ireland from Saturday. 33 of them in Donegal, specifically Burtonport, Rutland Island. Rutland was originally "humanitised" by William Burton Conyngham, a man famed for, according to wiki: "having presented the Trinity College Harp to Trinity College Dublin; from 1922 the harp was used as the model for the insignia of the Irish Free State and the Republic of Ireland. It was also registered as a Guinness trade mark from 1862." ( see Michael Tsarion - An occult history of Ireland) .

No one knows for sure why the whales came up. 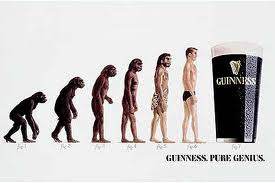 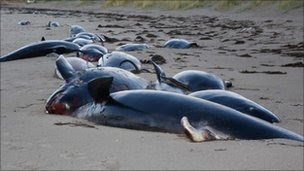 Exactly 22 days prior to the black and white whales beaching, 33 Chilean miners escaped their "hell hole", coming up from the depths of their sand-desert situated copper and gold mine, dapper in their pentagramic logo tops.(Vigilant Citizen - The Odd Masonic Imagery of the Chilean miners).

Copper and gold - a tangerine-ish, Unitedish colour, no doubt. Wikipedia records the metal as Orichalcum, nothing to do with oracles, divination and sperm, rather from Plato's Critias and his records of Atlantis.

Then, just to close, I checked wikipedia re the Goodwillie (surely resonating the bogus one, our saviour, Prince William). It referenced the Sun newspaper re a previous fracas involving the young "star" when he, in the manner of a David, ominously knocked out with 3 punches, an "18 stone" rugby player in Stirling. (I KO'd rugby giant butt he started it - The Sun).

Aye, but our time is numbered, the sands....

Posted by Newspaceman at 18:00

I reckon an alternative history of Football would be welcome addition to the net [ or tha' net].

Whales and miners were undersea/ground. Also Aphrodite/Venus was born from the sea, Botticelli has her on a seashell which are found on beaches/sand.

Venus' metal is copper while one of 'her' colours is Amber, also found in the sea [ perhaps on ground as well].

Tangerine - Tangiers, a colour opposite to Rangerine :)

Goodwillie, well extricated from the mass of info out there.

cheers aferrismoon. Bread and circus - drink and football. Been there, ended up on the Columbian crumb.

See tennis, Murray, Dunblane massacre. You know he was there ?

No wonder they get paid so much.

Anyhow , how about setting up another blog about the alternative football club history?

Could be an extra-time winner

okee well for what it's worth, sat and sun nights ive been working on a new post -- in place except for proofing and a couple late adds

-- Templeton goal - AF and i have been exchanging about Maurice Templesman, longtime jackie-o companion, and chair of board of Lazare (lizard) Kaplan, largest u.s. diamond company (so, miners etc)

"Prince William County hooked up with something I'd written in that post, the bit about William being birthed early and the 33 miners - Prince William countee : )

"In Chile a birth of sorts took place as Adamah, the carnal female held in her copper-womb 33 [ age of Jesus' crucifixion] men.

"The birth proved premature occurring 8 months after the earthquake at CONCEPCION on February 27th. Prince William was also birthed prematurely years ago."

"Prince William is the grandson of Queen Elizabeth II while Virginny, 'Old Dominion', 'Mother of Presidents' was doubtless named for Isis/Diana/Astraea/Cynthia symbol - Elizabeth I"

"wavelength you never let me down, no no"

Wow i didnt know there was a pertinent goodwillie in this fiasco!
I agree such an goody goody willy resonates goody two shoes, say no more.

Yes indeed a golden willy has to be a good one, the best in fact!

From there i am stumped but not ahem litteraly. Inshallah.

Let us not forget that prince William's ancestor was THE prince Albert..

And does this not bring us to..jack the ripper? Z

The man from Scone, he say no.

Yeah Z, you got it. Jack da ripper, whitechapel, sacrifice. Resonating the Pope meeting the Queen on 16/9 - St Ninian's Day the two religions to be sacrificed for a new version. Over time.

Ninny's the one that brought "Christianity" to Scotland, "our" Columbus inshallah, his main chapel (from memory) is called the white, or shimmering, one - surely resonating the pyramids - did they not shimmer and almost glow, from a distance ?

Binary Options is the way to [url=http://www.brokersring.com/]make money[/url] securely online

Wow i didnt know there was a pertinent goodwillie in this fiasco! I agree such an goody goody willy resonates goody two shoes, say no more. Yes indeed a golden willy has to be a good one, the best in fact! From there i am stumped but not ahem litteraly. Inshallah. CheerZ