John Reid, Baron Reid of Cardown, chairman of Celtic football club, previously held various senior government cabinet posts, including Blair's Secretary of State for Defence from 06/05/05 to 05/05/06 - thus Iraq. The image above is from wiki, captioned "John Reid answers questions at a Pentagon briefing, 7th November 2005". Mr. Reid was an early member of Labour Friends of Israel and is, potentially, of zionistic persuasion. 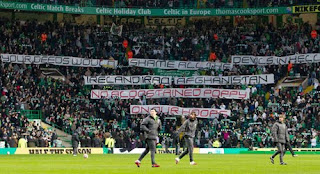 "Your deeds would shame all the devils in Hell. Ireland, Iraq, Afghanistan. No bloodstained poppies on our hoops." Next image is "Irish/Catholic" Glasgow Celtic football supporters from last Saturday, holding a "demonstration" against the team wearing poppies for Remembrance Day. The club have distanced themselves from the action, blaming a mysterious dissident minority called the "Green Brigade". Reid has vowed to ban the culprits. 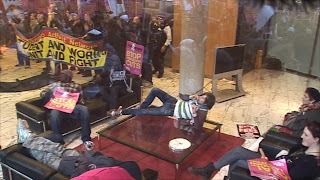 Following up with a snap from yesterday's London "student riot", note the green and white striped attire of the chap lounging on the table in the foyer of Millband House, the Tory party headquarters, the image heavily highlighted on the BBC. Millband House was originally built for Vickers - a "military-led" engineering company - see Vickers gun. The student union are blaming dissidents.

Next up, the Christ-mas day bomber, student, allegedly Yemen (BBC, 10/11/10 - yemen mail bomb could have detonated over eastern US) trained, Umar Farouk Abdulmutallab , born 22/12/86. (Bright Sparks). Note the Celtic top. Note too, that on 11/11/09, M15/6/ "British intelligence officials" apparently warned America that a jihadist was kicking about, ready to shoot. (wiki). 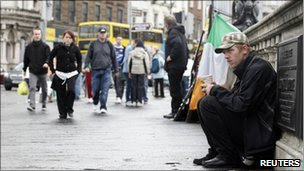 Last, but certainly not least, image from today's BBC, re todays, G20'ish announcement that Europe will need to bail out Ireland - once the economic Celtic tiger - or...

Beggars can't be choosers, for there are no choices soon.


wikipedia - Vickers
Posted by Newspaceman at 10:41

Reid and Robertson, a blast from the past. Two dirty brutes.

Green and White are colours associated with Islam , maybe that's why yon undie-bomber may have plumped for the 'Tic. Also green+white = Nigerian and Pakistani flags.

I noticed in one article the supporters had written 'bloosuckers' instead of 'blooDsuckers'.

The reaction to the ritual day being blasphemed is so vengeful.

"Poppies are used as emblems on tombstones to symbolize eternal sleep. This aspect was used, fictionally, in The Wonderful Wizard of Oz to create magical poppy fields, dangerous because they caused those who passed through them to sleep forever.[1]"

And so to bed.

Nah, he chose celtic cause he missed the target aferrismoon.