The Mark of the Beast ? 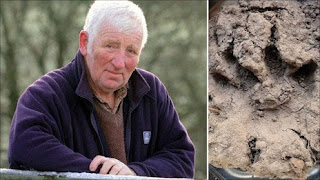 From a man in black we shape-shift to a black cat, as we read from the BBC of a dead lamb and mysterious mammoth feline believed to be prowling Princes Gate in Pembrokeshire, Wales; farmer Malcom MacPhee noting:

I couldn't believe it when I saw what had happened . . . the beast had ripped off one of its shoulders and there were huge claw marks all the way along its body.

"The beast, described as a large jet-black animal similar to a panther" 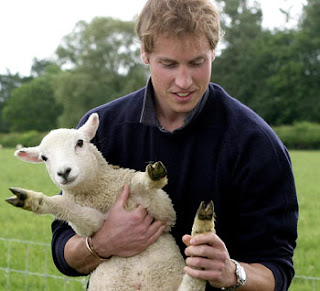 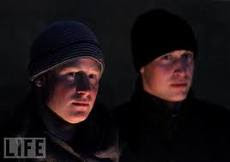 Note, the nearest village of Narberth is steeped in Welsh, Prince, mythology.

Posted by Newspaceman at 15:30

If I was to use football to describe the last few post and this - Archie ...king Gemmell.

Back in BlackBack in black
I hit the sack
I've been too long I'm glad to be back
Yes I'm, let loose
From the noose
That's kept me hanging about
I keep looking at the sky
'Cause it's gettin' me high
Forget the herse 'cause I'll never die
I got nine lives
Cat's eyes
Usin' every one of them and running wild

The first comment in that Telegraph article says that the photo of the animal paw print is that of a dog, so strangeness all round.

willie and the poor lamb, from last fall

william's first "search and rescue" op ... an area not unfamiliar to me, and three boys currently missing in midwest

"Firstly Prince Charles in India getting jiggy with an parasol in the manner of Mary Poppins, potentially highlighting the forthcoming global nanny state, certainly highlighting that he is semi parkers."

2) before getting fired from indonesia and taking 12 stitches in his face from a "stray elbow," pharaoh's magnificent telepromptness graced india --- what i characterized as a ritual pilgrimage to a goddess-dedicated city, post-massacre Mumbai (how's the mutton now baby?)

Cheers to you both, thanks for the lyrics moon. Yes, the first comment says it all re the dog-paw. Bona-fido.

McPhee (the farmer) sir-name comes from :

"As MacPhee, MacFee, MacFie, and MacPhie, all are developments of the pre 10th century Mac Dhubhshith, which translates literally as "The son of dark peaceful one".

Kal Dani too Ray, he used to comment here, spent a lot of time working out the time between events but was not that peaceful.

All eyes on St. Andrews Day, with Wills and Kate Uni etc. plus of course reports of Prince Andrew via the, surely Machiavellian, "wikileaks".

I am watching the "markets" today - especially the euro.

MacDubhShith , is that MacDoveShit, sort of when the Dove drops a holy spirit on the head of the faithful?

Wikileaks , as in 'We're takin' the piss!

If Wills isn't The Beast (not yet but in the near future), I will be the most-shocked; for it's not just written in the sky and the headlines but in the Arthurian "legend" as well.

I should have added if the Wedding had been on your predicted date then it would be the most boring [ as in drilling into the psyche] day of the year, surpassing 1954.

Link does not work moon, but I know where you are coming from.

I tried to type william turnstall paedo into google, when I got to william turn.. it popped up Prince William turns 28, from June. I think google "reacts" nowadays.