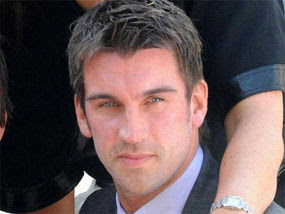 Although I view minimal television nowadays, I watched the final of ever-popular The Apprentice last night, a competition type Big Brotherish programme in which the eventual winner lands a plum job with business tycoon Alan Sugar, a "self made" multi millionaire tycoon.

This years top candidate was a milkman's son called Lee McQueen, a man so desperate to win that he lied on the application form about his further education experiences.

Lee told us a bit more about himself when he declared, during the last task of designing and promoting a man's aftershave, that all men aspired to be like James Bond: suave, sophisticated, and deeply masculine. He then opted to name the fragrance Roulette and promote it by way of an advertisment depicting a lady thrusting herself upon a 007 type character in a casino. Furthermore, Lee assured us that masculinity was back in vogue, replacing metrosexuality as the thing to be nowadays.

From the Daily Express, You're hired we read:

MILKMAN’S son Lee McQueen walked away with a £100,000-a-year job as he was crowned winner of The Apprentice last night.

Millions tuned in to watch the handsome recruitment sales manager steal the crown from three finalists with his formula for a new aftershave.
Afterwards the 30-year-old admitted he would love to splash out on a sports car, just like his namesake, Steve McQueen.
Milkman's son may seem irrelevant until we remember it is the same occupation as pre-fame Thomas Sean Connery, probably the most famous and best "Bond", a man who declined, and regretted doing so, the role of Thomas Crown in the Thomas Crown Affair, the role taken by Indiana born Steve McQueen in the 1968 original and subsequently played by another 007, Pierce Brosnan, in the 1999 remake.

Perhaps the Man Who Would Be King explains all.

cheers
Posted by Newspaceman at 11:40

"Son of a milkman" could be a euphemism for "bastard", considering the stereotypical role of the milkman being the lover of lonely housewives, and jokes about children who resemble the milkman.

Where I live, there is a parasitic species of bird called the "Cowbird" that deposits it's eggs in the nests of other birds to be raised as their own, until they hatch and kill the "rightful heirs". Much like your Cuckoo.

thanks michael, I am not sure about the bastard bit, Maybe it was meant to show that even a "lowly" milkman can make it in the rough tough ruthless business world.

Yes the cuckoo though - on a giant scale, millions of us feeding one particular family's aspirations in global domination and warmongering.

I'm reminded of the Book of Enoch, when the angels (the milkmen) took (unlawful) wives for themselves and begat children, the same bloodline that rumor has it now occupies the British throne. This brood looks exactly like the other chicks in the nest, but they behave quite differently - a ruthless streak. Perhaps they are finally showing us their true plumage?