Keeping it in the family


About a month or so ago I became embroiled in Macbeth, initially due to the comments of James Shelby Downard, the American "conspiracy theorist", in his JFK based essay King-Kill/33, and then in my post When shall we three meet again?, when I noted a trilogy of Macbethean "coincidences"; new gates at Glamis Castle - a tribute to the Queen mother, the snared hares of Cawdor, and the first and final meeting of the the three luxury liners, Queen Mary 2, Queen Victoria and Queen Elizabeth 2nd.

On Monday past, we saw Her Majesty the Queen "marking 55 years since her coronation by waving off the luxury cruise ship that shares her name", the aformentioned QE2, a ship she launched in 1967. Full BBC story is here.

The day after, Tuesday 3rd, we read of the young Prince, William Windsor Wales, and of the commencement of his naval training. From the BBC (here)

The prince's navy attachment is part of a project to familiarise the future monarch with the armed forces he will one day command.

He is already an officer with the Household Cavalry's Blues and Royals and has also completed a four-month attachment with the RAF.

His first morning was spent being taught how to operate a Picket boat, learning how to perform an 180-degree turn and how to drop anchor.

It should be noted that the latter task was the one which the media seemed to focus on.

What also requires highlighting is that 3rd of June is the Ancient Roman festival for Bellona, their war goddess. From wikipedia :

...and is supposed by many to have been the Romans' original war deity, predating the identification of Mars with Ares. She accompanied Mars into battle and is taken variously as his sister, wife or daughter

Especially when read in conjunction with my post Armilustrium of last October, when William visited Faslane, the nuclear submarine base :

On 19th October Prince William visited Faslane Military Base, home of the UK's Trident nuclear defence missile - the UK's only active nuclear weapon system.
Per wikipedia, 19th October is a Roman festival, in honour of the planet of war, Mars. It is named Armilustrium, a day when the weapons of the soldiers were "ritually purified and stored for winter".

And the Macbeth connection?

Again from wikipedia on the goddess Bellona:

Near the beginning of Shakespeare's Macbeth (I.ii.54), Macbeth is introduced as a violent and brave warrior when the Thane of Ross calls him "Bellona's bridegroom" (ie Mars). The goddess has also proved popular in post-Renaissance art as a female embodiment of military virtue, or a good opportunity to portray a woman in armour and helmet. 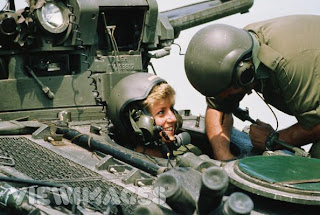 Posted by Newspaceman at 11:40

Sticking to your story pays off. Its excellent how things keep pushing through again and again. Slow , methodical reiterations.
In the latest INDY film, I noted that Alan Dale who plays Charles Widmore [ a Scot] in LOST turned up as Colonel ROSS , in charge of the Atom-bomb testing in 1957 [ in the film , don't know about 'real-life' which seems to link , via your story, Macbeth to The Atom Bomb [ or related warlike device]

That's great weaving of past & present - one off stories get lost but that's got a real spin in it's 'tale'.
I think this collecting of stories (created myths) through time is essential to get the bigger picture.

Cheers aferrismmon, I am well in with some Ross' but hardly see any films, none really, although the connections do interest me, I just dont have the time or the facilities really. Have some good bottles, Ross, Belford Road, Edinburgh, ammonia ones but nice. I have another of the black magic pots from Leicester - if you want one for a paperweight or suchlike, send me a post address. Good for the students to see anyway ?

WW - you are bang on, a myth being created/perpetuated.