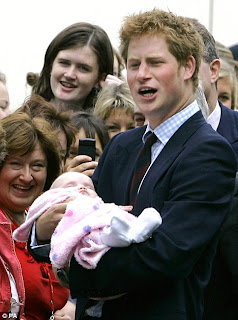 Prince Harry visited Wales, officially for the first time, on Thursday, as we read from the BBC :

Prince Harry was given a pop star-style welcome on his first day of official engagements in Wales.

A smiling Harry stopped to talk to a group of student nurses, commiserating with them about their long working hours, before holding five-month-old patient Lexi Hailstone.

As he talked to a fellow red-haired boy he told the 12-year-old: "I'm ginger - gingers love gingers."

See where we are going ?