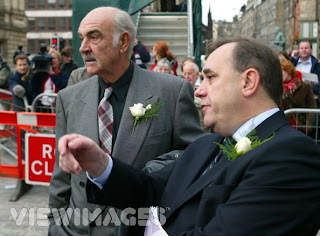 Following on from recent postings.

We read yesterday of Sean Connery and his apparent support for Donald Trump's proposed golf resort and housing development in the North East of Scotland. From the local Evening Express we hear more of his comments, stated in the presence of Scottish Prime Minister Alex Salmond, whilst the pair partook in a round together at Peterculter Golf Club on the outskirts of Aberdeen.

And he told how he would be the first to tee off at the Menie Estate.

Sir Sean said Mr Trump’s £1 billion resort should be backed by the Government so it can complement Paul Lawrie’s course at Blairs and Jack Nicklaus’s near Stonehaven.

The James Bond star announced his support while on a special mission in Aberdeen to promote Scotland.

The 77-year-old was at Peterculter Golf Club on the outskirts of the city to promote Homecoming Scotland 2009.

At first I thought that perhaps Homecoming 2009 was only related to the forthcoming Star Trek X1, a film which may in fact have it's European premier in historic Linlithgow, birthplace of both Montgomery "Scotty" Scott and Alex Salmond (see Background to the future), however it appears that additionally:

Homecoming 2009 has been organised to coincide with the 250th anniversary of the birth of poet Robert Burns.

It aims to attract ex-patriots and visitors from around the world for a mass celebration of Scottish culture.

Sir Sean said: “I’ve been a lifelong supporter of golf and Burns, so to combine the two next year seems very appropriate.

First Minister Alex Salmond, who was also at Peterculter Golf Club, said: “It is fantastic that Sir Sean has decided to do the film.

“Steven Spielberg couldn’t lure him out of retirement, but Homecoming obviously has.

And so it seems did the potentially-Biblical Stone of Destiny, as again on Monday night we saw Messrs Connery and Salmond back in action together - on the anniversary of the important Battle of Bannockburn - this time at Edinburgh Castle, cutting a stone shaped cake to celebrate the release of a film based on the daring removal and return to Scotland of this historically significant Coronation Stone. As we read from the Scone Stone's wikipedia entry:

Traditionally, it is supposed to be the pillow stone said to have been used by the Biblical Jacob. According to one legend, it was the Coronation Stone of the early Dál Riata Gaels when they lived in Ireland, which they brought with them when settling Caledonia. Another legend holds that the stone was actually the travelling altar used by St Columba in his missionary activities throughout what is now Scotland. Certainly, since the time of Kenneth Mac Alpin, the first King of Scots, at around 847, Scottish monarchs were seated upon the stone during their coronation ceremony 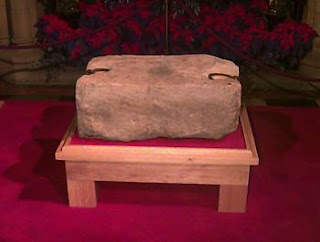 It should perhaps be noted that there were two large events in and around Edinburgh last weekend; the annual Royal Highland Show at Ingliston (just up river from the once Roman stronghold port of Cramond) and the Great Scottish Walk, the latter a 6000 strong human throng led out by none other than Glasgow Airport - anti-terrorist hero - John Smeaton - the same cigarette loving individual discussed in my post Regal King Size et cetera. The march followed a route including the Royal Palace of Holyrood and Edinburgh Castle which is in fact the headquarters of the 52nd Infantry Brigade, the same brigade that Prince Harry marched with in Edinburgh just last week, just a couple of days before his older brothers birthday on the sun drenched 21st June - a brother who's potentially imminent Coronation will no doubt involve the aforementioned stone.

I would further refer readers to my post Ex-luna, scienta when we saw Prince William receive his Royal Air Force wings from his father Charles at RAF Cranwell. The date of this ceremony was 11th April and I wrote about the "coincidence" that King Billy, or William of Orange, was crowned together with Mary 2nd of Scotland as joint Sovereigns of the United Kingdom on the same date, some 319 years before. Surely somehow connected to the fact that when the stone was "returned to Scotland" after the audacious Christmas Day 1950 theft, it was next seen on 11th April 1951, having been left in the alter of Arbroath Abbey on that date by the perpetrators for safe keeping by the Church of Scotland.

I leave you with a old Scottish saying: Mony a mickle makes a muckle, 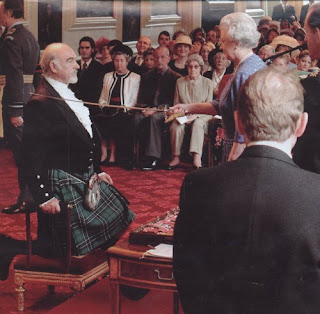 Or, lots of little things add up into big things


Burns and Freemasonry - Gie Me the Master's Apron

also, Hurray for Holyrood
Posted by Newspaceman at 09:43

Email ThisBlogThis!Share to TwitterShare to FacebookShare to Pinterest
Labels: bannockburn, stone of destiny

Ohh , yea, build another bloody golf course, that'll help the unemployed supplement their income. Bloody shite of hand!
This landgrabbing will of course end up with Sean or Donald [ perhaps they'll marry] becoming King Of ScotLAND and any Scots that don't get 'cleared'