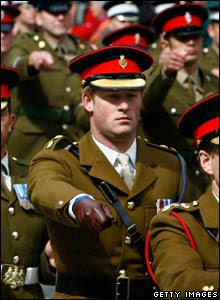 My last post concerned Prince Harry and his visit to St Giles Cathedral in Edinburgh to commemorate the soldiers of the 52nd Infantry Brigade who were killed or injured in Afghan action. We read more of Wednesday's events courtesy of the BBC in Sombre memorial for Harry comrades :

They were met by crowds of supporters, who lined the streets of Scotland's capital.

The group of schoolgirls chattered as they walked down the Royal Mile in Edinburgh. As they came to the barriers, the broadcast trucks and the waiting crowds, they stopped and stared.

Readers should be assured that the aforementioned "crowds" numbered in the mid hundreds bracket, the majority no doubt relatives of the 200 marching participants along with the ubiquitous posses of Japanese and American tourists who frequent the historic Royal Mile all year round. From a city with say half a million residents it seems a pretty poor turnout, but that's just my opinion.

What interests me more - from a social conditioning aspect I stress to add - is the, somewhat pointless, mention of young ladies in the report.

"Whats that all about?", I wondered. Then I remembered. Ginger-bred.

Youngsters from Cathays High School in Cardiff screamed, cheered and some even broke down in tears when the 23-year-old prince arrived 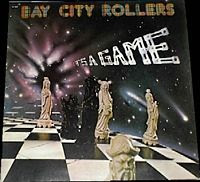 Note
Middle picture is 52nd Infantry Brigade "colours". I find them most curious considering that Prince William may well have received top mountaineer Edmund's Hillary's Order of the Garter the day before; and the Order of the Thistle chapel/ St Giles connection as noted yesterday. It is also perhaps relevant that the Order of the Thistle is believed to date from 787 after the battle of Athelstaneford where a cross of St Andrew was seen in the sky.

Posted by Newspaceman at 10:41

I absolutely bet he bloody well did get Edmund Hillary's Garter- that's what that special ceremony was for earlier in the year bringing his family to England & the St George Chapel instead of sending someone out to NZ for his funeral, & all the emphasis that has been put on Hillary this year. Remember Hillary's climb to the top of Everest was on Eve of Elizabeth's coronation & he got knighted almost straight afterwards - I'd better go before I say something I shouldn't

don't worry about it.