Where do they all come from ? 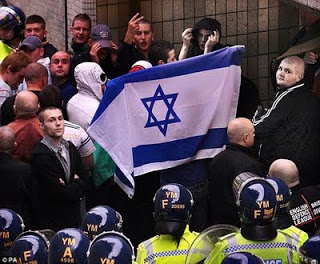 The Venerable Ashin Wirathu popped up here last month courtesy of the BBC - 969 problems; he's the "right wing", anti Muslim, Buddhist monk leader of the 969 group, numerals I find suspiciously symbolical of something else.

He made the mail on line yesterday as, reportedly, he "wants to copy the EDL in his bid to rid his country of it's Muslim minority". Just to remind the reader, the English Defence League appear to be mainly made up of football hooligans who are against immigration. After the "dubious" "murder" of Lee Rigby at Woolwich, the EDL had various demonstrations that very evening, later collecting monies for one of Prince William's favourite charities, the military Help for Heroes, monies which were declined. A spot of sporadic mosque attacking and suchlike also occurred. Such is the EDL, who, incidentally, are imaged at top with a SoD; shades of British Israel ?
According to the mail, who appear to have copied an article in The Times, Ashin stated "do you know the English Defence League? We would like to be like the EDL. Not carrying out violence, but protecting the public.". The article goes on to contradict his statement, noting that the 969 group burned a Muslim alive.

One can only surmise that Ashin does not have a handle on reality, more rather he is mind controlled - with ubiquitous, unseen, handler. Perhaps it is that he has in common with the EDL.

Posted by Newspaceman at 17:26

That would be my thoughts too Frank.

This murder seems to 'resemble' the Lee Rigby 'killing' in its effect on the British public , perhaps the EDL should remember how the SoD became a state flag

Thanks Moon, one learns something new every day.

As an immigrant, from U.K. to Canada. Seeing how the Canadian govt. will be bringing in around 1/4 million immigrants a year. I would like to point out that immigration, is a sort of legalized invasion. An invasion, that our forefathers went to war to prevent.

That the current residents pay for it as their resources are stretched. Especially in Canada where good quality jobs have all too frequently been shipped of-shore. Who will the immigrants be, coming to Canada? Well the top immigrant group is now from China. Followed by India then Philippines. Which has changed drastically from the previous G.B. Italy and U.S.

Regardless of the demographics, these new immigrants will be looking for jobs, land and transportation. Putting pressure on an infrastructure that tax-payers are already over-burdened with. By politicians who spend more than we earn. It stretches water, roads and housing. The job market so tight, from continuous recession. Becomes tighter. The new immigrants are not coming to appreciate the wonderful wilderness.

Immigrants expect the roads to be paved with gold and a life similar to what they left behind. They do not join in with life in Canada. They want to be Chinese-Canadian or Punjabi-Canadian, etc. They pollute and expect the environment to move over, in the rush to rape it. These immigrants want money and generally, they care little for how it's obtained. They are exploited by the global wealthy who own the car-lots, real-estate and big box stores. Immigrations bring corruption as a way of life.

So while I have little time for the type of fascist behaviour of groups like EDL. It should be seen how they can represent opinion of current residents? As much of what Enoch Powell prophesied in 1960's is actually happening.

Yes, we should realize why and how people are all brothers and sisters. Still the manipulation of immigration by politicians is more about making money for their corporate masters. Than it is about helping people to rise above the poverty line. No, immigration is a cash-cow only for the wealthy!

It maybe that this comment has little to do with your blog? However, I feel it is relevant to make the points?

I understand you're sentiments. I quite appreciate that en masse immigration does not work in terms of creating a "happy" society. That is perhaps the point though, the powers that be don't want a people to be happy, they would rather people were unhappy. This serves various purposes.

Surely another point is why these immigrants - and not just immigrants I assume - desire money and wealth, and indeed why it is promoted through the media as being a positive thing. See the TV show Apprentice for example.

Surely too, it is not just the immigrants who "rape" the land. Our farmers rape the land too, usually with oil-seed plants which do little for the environment.

I grew up with my Grandad, who fought in the war, he was not aa great fan of immigration back in the early 70's, so I do sympathise with you're views. In fact I wrote a short post last month called Transhumance which touched on it.

Again, I am no great fan of multi-culture, but the EDL are being used to stir up tension etc. See Frank's comment above. This has always been the case I am led to believe, with the National Front etc., their "leaders" are perhaps not quite what they appear to be.

One should also point out that the EDL's "enemy", Unite against Fascism, appear to be more fascist than the EDL. Shades of this were shown in Scotland when the UKIP leader, Farage, arrived, although again, he is perhaps not quite what he appears to be.

The manipulation of immigration, and indeed "feminism", is more to do with a one world society where everyone is the same - equal slaves.