One flew over the hornets' nest

A fictitious creature may seem an odd choice for a country’s national animal, but perhaps not for a country famed for its love for and long history of myth and legend, and the unicorn has been a Scottish heraldic symbol since the 12th century, when it was used on an early form of the Scottish coat of arms by William I.

Unicorns were worshipped by the ancient Babylonians, and written descriptions of them appear in texts from the ancient Persians, the Romans, the Greeks and ancient Jewish scholars, all describing a horse-like creature whose single horn had magical properties and could heal disease.

In Celtic mythology, the Unicorn of Scotland symbolized innocence and purity, healing powers, joy and even life itself, and was also seen as a symbol of masculinity and power.

During the reign of King James III (1466 - 1488), gold coins were introduced that featured a Unicorn, and at the time of King James VI of Scotland’s succeeding of Elizabeth I of England, and the resulting effective union of the two countries, the Scottish Royal Arms featured two unicorns as shield supporters. In a gesture of unity, King James replaced the one on the left with the English lion.

The symbolism was potent, for the lion and the unicorn had long been painted as enemies, vying for the crown of king of beasts, with the unicorn ruling through harmony and the lion by might.

Note that William 1st was, posthumously, nicknamed the Lion. This was because his flag, or standard, depicted a fork-tailed lion - The Lion Rampant, such as we see now. A similar flag had been used previously, under the Kingship of David, although his incorporated a dragon rather than a feline. David was the King who founded Holyrood Abbey, after his close encounter with a white-stag - calling out to God for help, the deer's antlers then forming the shape of a cross - and was allegedly a Christian. (see A monster ritual). David also founded Arbroath Abbey, something I will return to. 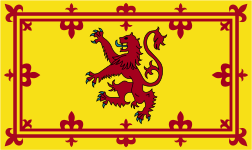 David's dragon standard was flown at the Battle of the Standard, in England. From wiki, re the Scottish forces:

"an execrable army, more atrocious than the pagans, neither fearing God nor regarding man, spread desolation over the whole province and slaughtered everywhere people of either sex, of every age and rank, destroying, pillaging and burning towns, churches and houses"

King James VI of Scotland, and 1st of England, along with his above noted "gesture of unity", revised the Bible. From wiki:

The translators of the Authorized King James Version of the Bible (1611) followed the Greek Septuagint (monokeros) and the Latin Vulgate (unicornis) and employed unicorn to translate re'em, providing a recognizable animal that was proverbial for its un-tamable nature. The American Standard Version translates this term "wild ox" in each case.

Note that "them" refers to the alleged exodus of the Israelites, led by Moses.

Some contest that Moses, was in fact Akhenaten., an Egyptian Pharaoh, and that the Bible rendition is allegorical.

Some suggest that Scota, the Egyptian princess who lent her name to Scotland, was Akhenaten's daughter.

Uri Geller purchased Lamb Island in the Firth of Forth, close to Edinburgh, as he believes Scota stashed her treasure there. Uri is infatuated with the digits 11 11. Uri is dodgy, but maybe not just in the context proffered up here. (Aangirfan)


Scota was allegedly a "returning" princess.

From wiki, re Scota :

Bisset was keen to legitimise a Scottish (as opposed to English) accession to the throne after Alexander III of Scotland died in 1286. Alexander himself at his coronation in 1249 heard his royal genealogy recited back through 56 generations to Scota. Bisset therefore attempted to legitimise a Scottish accession by making Scota significant, as having transported the Stone of Scone from Egypt during the exodus of Moses to Scotland.

The Stone of Scone is now located at Edinburgh Castle. It previously was in Westminster, London but was, allegedly, stolen, on Christmas Day 1950, and repatriated on April 11th 1951 - deposited at the aforementioned Arbroath Abbey - where the Declaration of Independence was manufactured.

Prince William got his "wings" on an 11th April.

It's not just Biblical sources who claim the unicorn to be un-tameable, that given, it seems apt that it is Scotland's "official animal", considering our mentality. I noted my thoughts on why the elite want Scotland independent in my previous post. Note though, that the main stream media, BBC etc., appear to have have an anti-Scottish independence slant. This is a simple rationale to explain, it's called reverse psychology.

In the Middle Ages and Renaissance it was believed that a unicorn could only be captured by a virgin. Da Vinci notes this in one of his notebooks.


Someone, who's book rights are owned by the CIA, thought that Edinburgh was in fact a coded Jerusalem.

Dolly the Sheep was cloned at Rosslyn.

"Masonic" Roslin Chapel, very close to Rosslyn, is said to contain the solution to an esoteric riddle.

The "techniques" utilised for pioneer Dolly have been revampted and upgrated. Now, we (humans), can create mice from drops of mouse blood (here)

Could that be the hidden secret behind the "virgin loving" Unicorn ?

cheers
Posted by Newspaceman at 19:38

'The oldest name for money is 'skot' which means 'cattle' and also 'treasure'' http://books.google.com.au/books?id=uVo9AAAAIAAJ&pg=PA277&lpg=PA277&dq=skot+money&source=bl&ots=d4348NKjnH&sig=LEE_Nos0OkfKEDzKR_nW4bV4mTg&hl=en&sa=X&ei=ZO7QUfTeJof8iAekz4DQAw&ved=0CEIQ6AEwBA#v=onepage&q=skot%20money&f=false
So for who 'Scota' may actually refer to one may want to look at that 'Egyptian slave' traded between 'brothers'. In a sense, if one allows a lot of latitude one could say she was 'returning'.
'Moses', at best seen as a literary device, was most certainly not Akhenaten, just another pimped-up rent-a-sheikh, unless of course one were to loosely infer the symbolism of the monotheis 'Aten'.
Phoenix, as well as its symbolism, may also be considered as the 'Greek' word for 'Frey'.

"We" are the slaves and "they" rub our noses in it.