Dreaming between the lines... 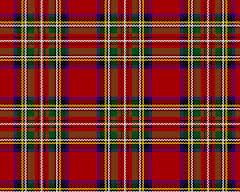 An interesting photo-article  from yesterday's BBC claiming that "tartan has come to represent the romance and history of ancient Scotland but this history is largely the invention of one man - Sir Walter Scott."

The piece continues, noting the Jacobite rebellion, the Battle of Culloden, and King George's visit (to Scotland) in 1822, "orchestrated" by Sir Walter, where the "mostly German" monarch wore a Royal Stuart kilt - "the uniform of his ancestors enemies" - and, under Scott's "theatrical direction", became the entire country's  clan chief. Reference too is given to Balmoral, where we saw the current Queen just recently : "The fad for plaid did not come to an end with George's death in 1830. Queen Victoria and Prince Albert also bought into the myth of the romantic Highlands when they built Balmoral Castle in 1856. Tartan featured heavily in the interior design of the castle. Carpets and curtains were covered in the pattern and the style quickly caught on with the Queen's subjects."

The English word tartan is derived from the French tiretain. This French word is probably derived from the verb tirer in reference to woven cloth (as opposed to knitted cloth).[note 1] Today tartan usually refers to coloured patterns, though originally a tartan did not have to be made up of any pattern at all. As late as the 1830s tartan was sometimes described as "plain coloured ... without pattern". Patterned cloth from the Gaelic speaking Scottish Highlands was called breacan, meaning many colours

From Sir Walter Scott as a freemason :

In 1757 the brethren purchased a hall in Hyndford’s Close, Netherbow, High Street, where the meetings were held for over a century. Other masonic bodies, including the Royal Order of Scotland, and the Royal Arch Chapter, now "Edinburgh" No. 1, held their earliest meetings there, and it was there that Sir Walter Scott and many other eminent, Scotsmen were made freemasons.

Again from wiki, coat of many colours, the King James Bible notes :

Now Israel (Jacob) loved Joseph more than all his children, because he was the son of his old age: and he made him a coat of many colours.

Legends place the origins in Biblical times and consider the stone to be the Stone of Jacob taken by Jacob while in Haran.

The "alleged" Stone of Destiny currently resides at Edinburgh Castle, that's the one with the solitary, franchised ice-cream van, registration WMS 666 T. In the shadow of Edinburgh Castle, just next to uber-famous Princes Street, stands the imposing, phallic, Scott Monument, named after Sir Walter. Only a throw away is the Balmoral Hotel, where Rowling finished her Harry Potter series.

From the Scottish Kirk's (church) 10 page, The inheritance of Abraham, a report on the promised land :

The Church of Scotland's ruling General Assembly has approved a call to crown monarchs in both England and Scotland, should Scotland becomes independent

cheers
Posted by Newspaceman at 08:58

Interesting how people take from the Bible whatever fits their agendas and I have absolutely no doubt King James did the same. He went as far as to change some words in order to make them match his truth. Take for example Genesis 4:21 where the genealogy of Cain is exposed: In King James’ Bible it reads: “And his brother's name was Jubal: he was the father of all such as handle the harp and organ.” while in many other versions of the Bible (catholic, eastern orthodox or other) it reads: ”His brother was Jubal: he was the ancestor of all who play the guitar and the blowpipe” which blowpipe is the precursor of the bagpipe. More info about this here:
http://www.ehow.com/info_8407393_types-blow-pipe-musical-instruments.html
But I guess that was a clue that hit a little too close to home..

His wife's last name was Carpenter and Wiki adds the French, or maybe Breton, 'Charpentier'.

Joseph was a carpenter, thus linking it to the Bible.

I've never believed that Scots, or anyone else, would live in fairly cold country in kilt without underwear [ or even with]. I mean imagine the midges up there!

Anon, many thanks, James was allegedly a supporter of British Israelism and the divine right of Kings, so "his" Bible was no doubt produced to reflect that, perhaps in an occult manner. Thanks for the pipe info too.

Thanks too Moon, johnstons baby lotion works wonders for midges, but it neeeds to be that particular brand.

Most Scots wore leggings, with the kilt of plain wool wrapped like a shawl for warmth and sleeping ...... and of course the ubiquitous shift, worn throughout Europe.

Yeah, I had to wear thick socks and shorts to school in the winter. It was the "uniform". Toughens one up though, it is claimed.