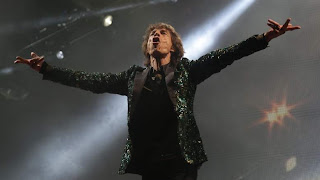 Back in 1969, the Rolling Stones played the Altamont music festival. Hells Angels provided security. Some scuffles had broken out in the crowd before their appearance. As they commenced their set, with the track Sympathy for the Devil, the fighting became more intense. By the time they complete their next song, Under My Thumb, a man had been murdered. At the time, American media referred to the band as "an intimidating brooding coven".

Last night the Stones played Glastonbury for the first time. From the BBC :

The Stones had arrived on stage after an intro tape featuring the sounds of Worthy Farm's usual residents, 350 dairy cows.

The Stones, however, did not begin their set with Sympathy for the Devil. It was number 15 of their routine.  As they performed it, "flares turned the sky red and a  mechanical phoenix rose from atop the Pyramid Stage. Apparently the phoenix blew fire high into the dark skies.

Make of that what you will, to me it's self explanatory, as it was with the phoenix at the London Olympic closing ceremony. 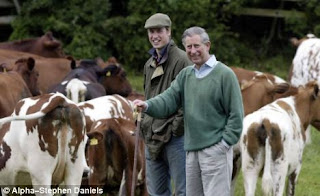 Note - Eavis is the festival boss, he references Prince Harry in the linked BBC report. I touched on Glastonbury a couple of posts ago.
Posted by Newspaceman at 11:41

In 2011 senior Tory David SHALE [ small stones?] died in the toilet [ or throne] at Glastonbury festival.

"Eavis said that the mechanical phoenix that sprung into action during the Stones' set last night took a year to make and cost "more than I’d like to say." He said the bird will come to life another two times today, including during Mumford and Sons' headline set. "I’ve got to get my money’s worth, haven’t I?" he said."

and if the birds appearance at the rolling stones last night was the first, that'll make three coming-to-life's in total.

i've no idea what to make of this, but skip to 36:55 in this video and check the visuals after she sings "this is the beginning of forever"

Thanks Moon, thanks Clarence, there are 33s everywhere at the moment.