The Fresh Prince of Gelled Hair 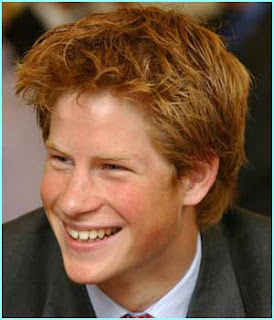 It began for me two Junes ago in 2008 when we saw Prince Harry march up Edinburgh's Royal Mile, the BBC reporting that:

They were met by crowds of supporters, who lined the streets of Scotland's capital.
The group of schoolgirls chattered as they walked down the Royal Mile in Edinburgh. As they came to the barriers, the broadcast trucks and the waiting crowds, they stopped and stared.

Today we read that Harry has been voted King of Cool 2010 by GQ magazine.

Wait for his brother.

Posted by Newspaceman at 13:41

It's died red hair too!

Maybe Harry and Wills will battle for the throne , like Mary and Elizabeth [ the red hair]

Anon, thanks, though I think it is still alive.

Aferrismoon, you may be right - though I fear a sticky end for Harry if that is the case.

Ray - Did you write Fireman Sam by any chance. In the first ever episode which had a firelady (Penny), she turned up driving a truck with the reg V 666. I have tried to screendump off the DVD - but can't.

Donny - your blog is pish, although I rate mine in similar terms so don't take that badly. Sorry to be blunt but I know others have told you this. The main problem seems to be that you are centering text - but unfortunately "all" your text is being centered rather than just the bit you want (underneath a photo for example). I don't know how to cure it but it wont be hard, just muck about behind the scenes - cut and paste the bits you did'nt write - that's the trick. If it wont post at the end due to invalid HTML, just press delete and retry. Usually it goes through eventually.

Also, I don't appreciate your Icke/ reptile/space invaders books for sale. It may well be true but Icke burned his bridges when he went on Wogan back in the '80's. It makes me suspicious of his intentions as do his 26 books about the same thing.

While we all watch the sky...