I thought I had covered the Friday night televised news scam before - where they finish the report of the day's events with reference to a more upbeat type of story other than the usual "bad news" which makes up the majority of the programming. It seems not however - according to google anyway. The basis of the swindle being that the average viewer is in a different frame of mind come Friday at 10, their minds loosened, indeed perhaps susceptible, with the thought of a lie-in on Saturday and a day or two "off".

Last night was no different on the British Broadcasting Company channel, our dashing hero, Prince William, opening a "new" military rehabilitation centre (again something I have written about but can't find) which was funded by charity Help for Heroes, thus we were treated to images of recuperating patients, mainly amputees with artificial legs and suchlike; the gist being that this was no bad thing really, they had lost limbs defending our great country. Whilst this may not sound too "upbeat", I can assure the reader it was presented as such as we saw the chaps apparently on the road to recovery; the majority involved in some type of amphibious physiotherapy involving pools, tanks and suchlike.
Just after the "big news" comes the 5 minute regional presentation. Here in Scotland we closed that with another royal based story: watching Prince Charles nosing a glass of the water of life as he opened the extension to Chivas Brothers', The Glenlivet Distillery, in Speyside. 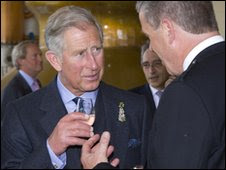 Email ThisBlogThis!Share to TwitterShare to FacebookShare to Pinterest
Labels: rehabi