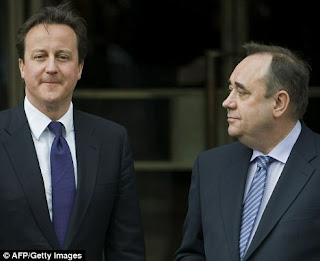 David Cameron takes his first jaunt outside of London as Prime Minister and heads to Edinburgh's Holyrood to meet Scottish top-dog, Alex Salmond, specifically in Queensberry House, which has strong links with the creation of the Kingdom of Great Britain in 1707 via the Treaty of Union. Note that in my opinion, Scotland will gain it's independence as part of an "alchemical" ritual (everything must go back to base parts/think cooking) in the creation of the new global "Golden Age". It is also worth stating (given freemasonry's 33) that Cameron's visit came almost exactly 303 years to the day after the "union" implementation if we include the Gregorian calendar reformation in 1752.

He then navigates north, close to Inverness; Arersier and the military function of Fort George, home to the Black Watch, 3rd Battalion, Royal Regiment of Scotland.

British Israel: The Hidden Hand Behind the "Kingdom of God" Deception
.
"In our frequent references to Masonry in this text we have accused Masonry of not only complicity in the political aspects of the British Israel conspiracy but that it is the work of the Masonic Order to build the spiritual state of World Brotherhood, which is only the Masonic term for the kingdom of God on earth. If, then, we can recognize the subversive and pernicious spirit of World Brotherhood, then we can identify Masonry and British Israelism as one "
BBC News report.