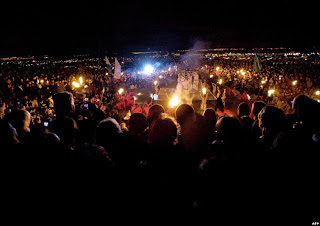 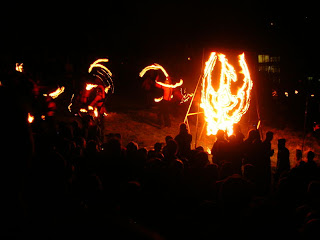 Tying in well with the Prince William/Green man etc. theories expressed here, and perhaps especially relevant to the last two posts, we note from the News of the World of how the Dark One was indeed present in Scotland yesterday, May Day, attending a friend's wedding at St. Salvator's Chapel in St. Andrews.
Obviously it would be speculative on my part to suggest that he stayed in Edinburgh the previous night - perhaps at Holyrood where, on the stroke of midnight, he crept, perhaps disguised, from the Royal Palace; shimmying over the wall before strolling round part of "his" Royal Park and joining the pagan Beltane Fire Festival on Calton Hill.
Or indeed, that he was participating in some type of Babylonian/Egyptian, Crowley style sex-magik ritual in an unknown underground cavern beneath the volcanic Arthur's Seat - potentially the Atlantean sphinx, reincarnated in Egypt by the original global colonisers.
Whatever the case, he was here. 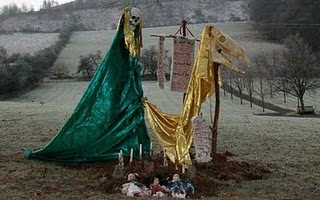 cheers
bottom image from the Melrose effigy, see President Arthur - no bones about it.
Posted by Newspaceman at 10:34

Newspaceman, this is Jemima Honeybottom here, I am a close friend of Kate Middleton. I just wanted to say that I was at the wedding and Kate mentioned that Wills had vanished the previous evening, for a number of hours. When he returned he was hot and sweaty and smelled of smoke. He claimed to have been helping at a homeless shelter but Kate does not believe him.

Thank you for spreading the truth.

Today is Lag BaOmer in Israel which is the 33rd day as counted from the 2nd day of passover to Shavuot.

Anyhow plenty of burnings and bonfires
and mystic numbers

" he was participating in some type of Babylonian/Egyptian, Crowley style sex-magik ritual in an unknown underground cavern beneath the volcanic Arthur's Seat "

You have a sordid mind.

Anon, I will need take your word that they are "sordid" given I have little knowledge of the practices. Is the whole Beltane thing not magikal ?