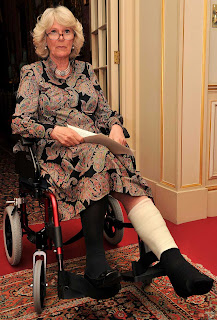 The morning after the Olympic steel mascot blooding I happened to chance upon BBC 2's radio news which included a topical Prince Charles "story, that he was to be the "front-man" for a forthcoming documentary on classical composer Hubert Parry - the dude who put the tune to William Blake's "stirring anthem" Jerusalem (And did Those Feet in Ancient Times). Bizarrely perhaps, the story never reached either their own website or many others, thus the link from Yahoo News is below. It is worth noting too that the same radio show, Ken Bruce, then played three different version's of "Over the Rainbow"; all to do with an ongoing popular BBC "talent" competition show you understand.

It was not the only media story concerning the grandfatherly-like Prince this week, as noted from Monday's BBC News': Prince Charles blamed in £81m court claim over barracks plans. This concerned the old fashioned, fuddy-duddy - currently seen pushing crocked Camilla - being blamed for the rejection of a "steel and glass" architectural planning application by developers Candy Brothers, after writing a letter of complaint. Like many monarchical media stories it is not the content of the report that interest me, rather the gist (people still write letters? I like candy):

"The court heard the prince wrote a letter saying his "heart sank" when he saw architect Lord Rogers' designs." 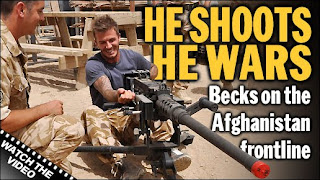 Then on Friday we turned our eyes to a different kind of "chosen one", David Beckham, the man who you will remember kick-started the countdown to the London Olympics with a rainbow resonating arc and resulting "potential ebay" crock of gold. This week the hunky, beefcaked, six packed superstar visited demoralised troops in Afghanistan, signing autographs and playing with steel as he drifted through the barracks 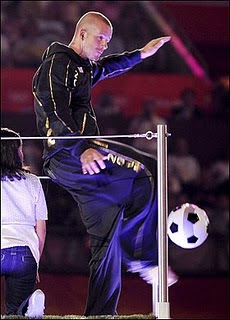 Yesterday was the turn of another one, this the one: funky, cakebeefed, son of an isis, sorry icon, Prince William carrying a six pack or three (poetic license) as he floated through BBC Radio 1's Big Weekend music festival in his Dragon kingdom of Wales. The BBC report headlined, Prince William and Kate Middleton turn up at Big Weekend, utilises the below image of Florence from Florence and the Machine, dressed angelically in a crucified position, read the report - hopefully you get the connections. 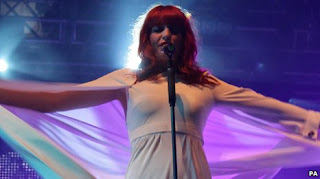 It's your children they want to steal from.

Posted by Newspaceman at 05:06