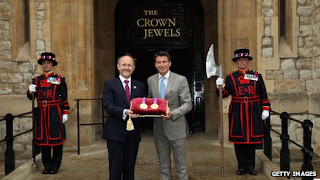 Just briefly, the Olympic torch is due to arrive in London on Friday, where it will be abseiled into the Tower of London by a Royal Marine, Martin Williams.


From there, it is due to be carried by 982 torchbearers (18 short of 1,000) through the 33 London boroughs. As far as I can ascertain from the BBC article, on Thursday 26th it will visit Downing Street and Buckingham Palace before, on the following Friday (the last day), leave from Hampton Court Palace, originally in the ownership of The Order of St. John of Jerusalem, in a cauldron.

Also note this BBC article from last week - Who invented the National Debt - where it explains the history of credit and debt in the UK, beginning with William of Orange and the Stuarts. Very apt, at this moment in time.

Posted by Newspaceman at 14:05

Email ThisBlogThis!Share to TwitterShare to FacebookShare to Pinterest
Labels: cauldron, Tower of London

The link to credit and debt needs changing as it is the same as the BBC news report for the torch relay.

Note: the 72(0)nd day from the start of the torch relay brings us to the first Sunday of the Olympic games (needs checking/confirmation).

For three days and nights (3x24=72(0)) of the resurrection and the cycle started again.

Your binding spells NewP! First the uncannily accurate "a load of balls" and now look at the sign "The crown jewels".

Thanks, Anon2, have amended, apologies.