Progression of the Fittest 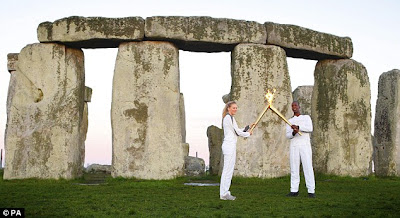 Day 55 of the LOTR and as noted yesterday it  began at Druidic Stonehenge "as the sun rose", although the  the actual relay began  at 7.49am from Cathedral Green in Salisbury (BBC News). The golden torch was carried by American "sprint legend", Michael Johnson, for both events, which may seem an extraordinary choice unless one is aware of his recent comments.


Just back in June, Michael advised that black American and Caribbean sprinters carry a "superior athletic gene" due to their decendency from African slaves. According to the mail on line,   "some scientists believe a combination of selective breeding by slave owners and appalling conditions meant that only the strongest slaves endured, creating a group predisposed to record-breaking athletic performance", whilst Michael himself commented that "Difficult as it was to hear, slavery has benefited descendants like me – I believe there is a superior  athletic gene in us".

If we take this peculiar philosophy in the context of today's world,  adding into the equation that there are indeed too many humans and that the "powers that be" realise this, then it gives even more substance to the ongoing sneaking suspicion in the back of my mind that the game plan is to eradicate the majority of humanity - act out the Book of Revelation - thus leaving themselves with a small workforce of slaves, whilst they act as "new gods" of a "new Eden".

One has to remember that the "new gods" see this as progression for the human race, indeed maybe in centuries to come our descendants will be equally as brain-washed as poor Michael.

The race things well on the up and up, what with the Euros and Sol Campbell, England team selection and Rio Ferdinand, John Terry, Evra and Suarez, Diane Abbots remarks on white people being divisive - checkerboard stuff it seems.

Thinking about the SFA, SPL and Ranger:

'babylon is burning
with integrity'

55 also represents EE which is 33 backwards.

Aye Moon, it burns. Note the leap year with Rangers, was it the 13th, or the 12th of July. Suppose it depends on what/who one worships, or should that be warships :

Thanks Jeff, never got the 55/33/EE before. Ties in with moon's comments and the killing of the Gerbil - http://newspaceman.blogspot.co.uk/2012/05/ger-kill-and-hide.html - note car reg plates - YF55 EZZ. I appreciate you might make little sense of that, it makes a lot to me

cheers, both much appreciated.

Thanks Ray. Hope all is well with you.

all is not well

it wasnt a compliment, nor a guess

if youre going to reject Christ's Word in the bible's final book as a plot of the british crown et al, at least spell the book's name correctly