Shoot those poisoned arrows through the heart 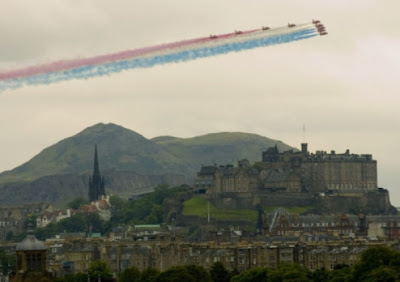 The  above image is from today's Edinburgh Evening News. It shows the Scottish capital's city centre off rather well, the Castle in the foreground with extinct volcano Arthur's Seat to the back.


According to the linked article, the Royal Air Force Red Arrows are due to flyover tomorrow in respect of Prince William's Olympics: "nine aircraft will perform the Big Battle formation over Holyrood Park, flying up the Royal Mile, over  Edinburgh Castle then over the crowds".


The event will take place at "precisely" 12.33 British Summer Time, which equates to 11.33 Greenwich Mean Time.

see too - A New Eden

Note - Arthur's Seat is  located in Holyrood Park, home of the Royal Palace and the Scottish Parliament.

Note - I  am still banking on Prince William lighting the cauldron at the opening ceremony.

Note too from the linked report that bells are due to be rung for  the first time in sixty years from The Hub in the Royal Mile. The Hub crossed the radar here back in 2008 when an alleged crystal skull of Atlantis was displayed for one day only, on 23rd November. Given that it was a leap year (extra day added), I correlated this sun-wise into 22/11, JFK assassination etc. etc. The post is here, although it is not that great, sorry.
Posted by Newspaceman at 18:32