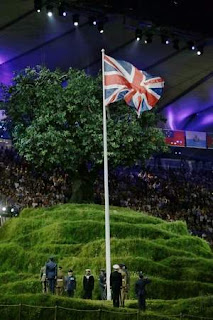 Will get a proper post up over the next few day re the opening ceremony; highlight for me given the content of this blog was the raising of the Union Jack on "Glastonbury Tor" as the pyjama attired childrens "signing" choir, Kaos, sung God Save the Queen. Read between the lines.


From my post A New Eden : "Curiously, "In England's green and pleasant land" - on which the hymn Jerusalem is based - is the  last line of  William Blake's "And did those feet in ancient time" poem, which he based on the "apocryphal story" that a young Jesus Christ visited England  in the company of his uncle, Joseph of Amirathea. According to wiki the legend is linked to an idea in the Book of Revelation describing a "second coming" wherein Jesus establishes a new Jerusalem. Danny doesn't mention any of that, nor that Joseph is alleged to have thrust his staff in the ground at Glastonbury, whereupon a thorn tree grew." 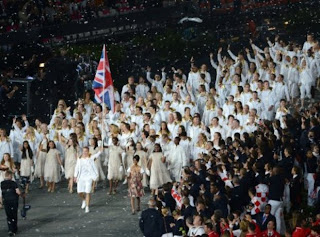 Note -once again, got it well wrong about Prince William lighting the cauldron, will see what happens in the closing ceremony.

Note - Kaos are a "signing" choir for deaf and hearing children.
Posted by Newspaceman at 13:41