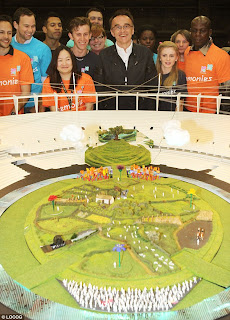 Yesterday was day 24 of the Olympic torch relay with another potential "act of God" as the torch went  out, and refused to relight, at the beginning of the event (The Callanish Stones), causing the organisers to "dash" 30 miles back to Stornoway to collect the "mother flame". (Scottish Sun - Panic as Olympic torch is blown out)


Today the torch visits Scone Palace, originally the home of the Stone of Destiny, which some say is Jacob's pillow stone (wiki). Certainly it seems to have been of some significance historically, given it's use as coronation stone for "Kings" of Scotland and indeed the current monarchy.


Coincidentally, today saw the announcement of the final  details of the London Olympics opening ceremony, director Danny Boyle unveiling his masterpiece. Apparently it is a countryside setting with animals and suchlike, together with a recreation of Glastonbury Tor - complete with solitary tree. It is to be titled Green and Pleasant, seemingly because Danny is creating "a picture of ourselves as a nation". (BBC report)


Curiously, "In England's green and pleasant land" - on which the hymn Jerusalem is based - is the  last line of  William Blake's "And did those feet in ancient time" poem, which he based on the "apocryphal story" that a young Jesus Christ visited England  in the company of his uncle, Joseph of Amirathea. According to wiki the legend is linked to an idea in the Book of Revelation describing a "second coming" wherein Jesus establishes a new Jerusalem. Danny doesn't mention any of that, nor that Joseph is alleged to have thrust his staff in the ground at Glastonbury, whereupon a thorn tree grew.

Diversifying very slightly, something I have written perhaps too much about recently is the football club Glasgow Rangers and their precarious financial position since Valentines Day when they entered administration. Cutting to the quick: according to today's BBC, it seems that Her Majesty's Revenue and Customs have rejected the "creditors" deal offered by would-be owner, Charles Green, in terms of outstanding liabilities and as such the club will need to be liquidated and "reborn" as a  same-but-different entity.  I believe that the creditors meeting is to be held on Thursday, the day after the Olympic torch travels from St. Andrew's to  Edinburgh, and "her" Castle -  the current home of the (alleged) Stone of Destiny. One has to perhaps understand fully the William of Orange/King Billy/Protestant angle here in terms of Rangers - and it's impending reincarnation. 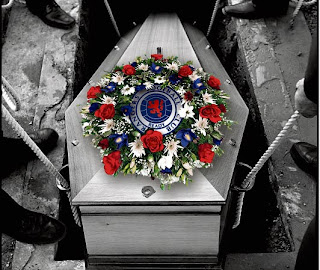 Middle image - From the film Ben Hur. Ben, dressed in tartan, meets (Druid) Balthazar - one of the three wise men - as he goes to hear Jesus preach. Source: here.

Posted by Newspaceman at 13:30

I am still enjoying your blog, and notice it mentioned by others. Today I had a little chuckle as I read this post. I wrote about the Tree and the Tor back in Dec. 2010 on my 'Significance or R' blog. How totally weird, that of all the places in the UK Danny Boyle could have referenced, he chose the Tor...!

On Thursday, Day 26, the Torch will be passing by Roslyn (/Roslin).

Any chance of a web-link reference to your post ?

Prince Billy was backed by the Lurianic Qabbalists of Amsterdam - Orange Revolution - Frances Yates [ Historian ] noted this in one of her books and said it required further research.

The Dutch then went on to orangify South Africa, and after a couple of hundred years I believe they supplied the UDF with a few guns.

The Lurianic Jews were known for their messianic fervour at the time.

Love to hear Vlad Romanov's take on it : )

Anon2 - It's not as intriguing as The Newspaceman's but here it is anyway...http://thesignificanceofr.blogspot.com/2010/12/christmas-tree-of-life-and-knowledge.html

Thanks Marti, nice article. I read as book a few months ago by a Barry Dunford - The Holy Land of Scotland. It centres round a place called Fortingall in Glen Lyon, which has the oldest tree - a yew - in the world I think. Anyway, Barry theorises that Jesus was up here and that Fortingall was a training centre for Druids. Have a look at the Fortingall yew on wiki.

Anon 2, thanks, good stuff re Roslin/Rosslyn on the link to the right - Mythomorph.

Moon, thanks, Vlad (the impaler) has just sacked the manager who won Hearts the cup.

Have been reading your blog and just wanted to thank you for putting this information together for us who sense what's going on, but just can't put it together. You are a blessing. Thank you so much for your all your efforts.