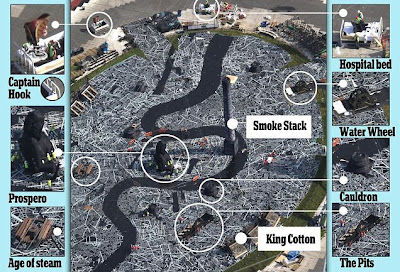 Above image is from the mail on line, showing  more details of Danny Boyle's Olympic opening ceremony;  some fairly dark imagery it appears to go with the "green and pleasant", note giant figure in centre with wand - allegedly Prospero - and cauldron in close proximity.

Meanwhile, up here in Scotland, a small earthquake - 1.1 - was recorded on Saturday in Lochaber's "Loch of Hell". (BBC) 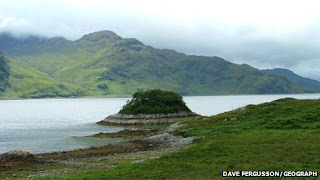 cheers
Posted by Newspaceman at 07:54

Going back to the Industrial revolution, millions of poor working tirelessly, the elitist empire of celebrities both corporate and govt. lording it, in the green and pleasant lands.

He did Slumdog Millionaire, only way out through lottery or talent show, the rest back 'Greyville' as presented by his vacuous gob of shite piss take.
Is it possible to be sinister and crap at the same time?

The Tempest was written in James I/VI's reign so may relate to William.

Prospero keeps all the crestures of his island under control via magic - perhaps says something about the Olympic ZOne where all the food, drink, branding is strictly controlled.


"The former Beatles star has admitted that he will be ‘closing the opening’."

seems centered on the ISLE OF DOGS AREA ,EL EYE OF GOD (even a l shape on the "isle",same area that millions have zoomed in on before they watch eastenders and get whaked with unpleasant emotional vibes.......all feeding negativity into this ritual opening ceremony......masonic sorcery.
Eastenders has THE SQUARE and THE ARCHES ,character Phil Mitchel always has egyption iconography in his flat for no reason,
gay muslims adopting babies with a character called CHRISTEN etc etc etc....interesting.
cheers,
D.

Moon, thanks again. The Olympic "Zone" with it's security, control etc., is an image of our future society. Am wondering if the plan is to reduce human numbers drastically - maybe by virus - the leftovers living as technologically controlled slaves, the elite as "gods". Who, knows really, but it's well dodgy, all of it.

Sumbliminal Observer, thanks, I understand exactly where you are coming from re Eastenders. I am sure that James Shelby Downard mentions the name Beale in his KK33 essay (link to right), and says it has some sort of kabbalistic undertones. If that's right, note from yesterday's media the images of homeless and mentally deranged "Ian Beale". More socery ?

Sorry, sorcery, need to get something to eat.