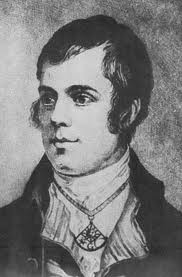 It's Prince William's 30th birthday today and we note that the London 2012 Festival - which runs in tandem with the Olympics - also kicks off. In case you have'nt guessed by now, yes in Scotland: the opening concert to be performed by local youngsters, the Big Noise Orchestra, in Raploch, Stirling, in the shadow of the castle and  imposing William Wallace statue. (BBC)

Meanwhile, the inflatable Stonehenge "bouncy castle" - Sacrilege - which was unveiled at Glasgow Green in April , is also involved in the 2012 Festival opening, today it will appear at Carmarthen Castle in Wales, a place with alleged associations to King Arthur and indeed Merlin (although so has Glasgow , whilst it's Green is the "birthplace" of Glasgow Rangers - One flew over the phoenix nest) 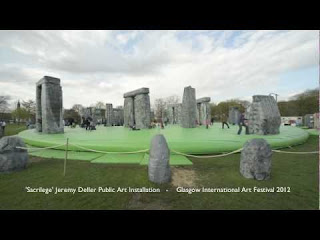 As noted here yesterday, the Olympic torch relay commenced in Dumfries, nicknamed Queen of the South, this morning on day 34, after finishing yesterday in Carlisle. Demelza Powell began proceedings from the Robert Burns statue. The relay will end back down in England, after 121 miles (11 squared), at Windermere, where a giant pyrotechnics show called, Lakes Alive: On the Night Shift, will greet it, again allegedly as part of the London 2012 Festival opening; although perhaps the name has more subtle connotations. 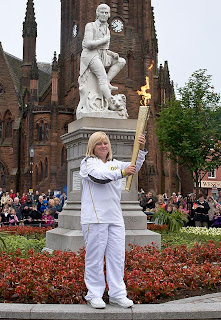 Posted by Newspaceman at 13:51