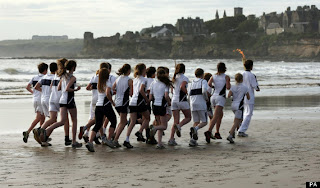 In Tuesday's New Eden post, I considered the manufactured synchronicity between the Olympic torch relay passing Scone Palace (Stone of Destiny) and the announcement of the opening "Green and Pleasant" ceremony, surmising that if we added the Glasgow Rangers/ Charles Green predicament to the cauldron, together with a bit of Joseph of Arimathea and his historical tree planting jaunt to Glastonbury, then it spells, well, trouble.


Sticking with the green-theme, the torch yesterday travelled from home of  golf, St. Andrew's - where Wills met Kate - to Edinburgh. The highlight of the morning appeared to be 13 year old Joseph Forrester, who led a group of schoolchildren along  the beach in a reenactment of a scene filmed for the movie Chariots of Fire. Joseph was lucky enough to have carried the torch just prior to this as well - a unique second coming, so to speak. At the end of the day the torch was carried into Edinburgh Castle (Stone of  Destiny/franchised ice cream van registration WMS 666 T) by a Lesley Forrest. (BBC) 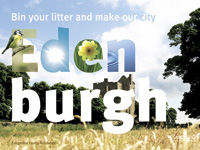 Meanwhile, down in Nottingham, Prince William was thanking the Queen for her "love and devotion" as part of the ongoing Jubilee celebrations. Nottingham is, of course, also synonymous with forests, not just because of the football club but also because of Robin Hood, that legendary "green man" who took from the rich to give to the poor.

Also take note that the torch travels down to England tonight, destination Alnwick Castle, a location used for several films, including Robin Hood: Prince of Thieves and the Harry Potter series. Perhaps worth pointing out again that Rowling completed her writing of the final Deathly Hallows in the Balmoral Hotel - not a stone throw from Edinburgh Castle, signing a bust of Hermes in recognition.

Posted by Newspaceman at 13:34

Email ThisBlogThis!Share to TwitterShare to FacebookShare to Pinterest
Labels: can't see the wood for the trees, one world currency, robin hood

With all these For(r)ests about then the Druids certainly are at work in a big way,

And, yesterday, Friday June 15th, on the front page of The Times, in full blown, no mistaking - for all to see, a photo of Da Vinci's 'St John the Baptist' with the druidic hand-pointing sign advocating a telling of truth.
The story, alledgedly, about scientists having found the hand that baptised Christ.

Thanks anon2, This is from the Tsarion link on the right ( I know he gets a bad press from some but there is a lot of good, free, info there):

"The Madonna, by Sandro Botticelli. Note how the youthful John the Baptist gazes out toward the viewer. His arms are suggestively crossed on his breast in the manner of Egyptian gods and pharaohs. This is no surprise, once we understand that John the Baptizer was based on Anubis the Baptizer. As authors such as Picknett and Prince have discovered, it is John the Baptist who was the prophet chosen as tutelary master by secret societies such as the Freemasons and Knights Templar"...

"..Anubis is also the messenger of the gods, equivalent to the Greek god Hermes or Mercury.."

Quite pertinent in context here, given Anubis merged with Hermes - see Rowling's Harry Potter dedication at the Balmoral Hotel.

Note too Mervin King's bank bailout, the news released on Thursday night after I posted. In effect, he is taking from the rich (people who have savings) and giving to the poor (people who owe money) - although it is not quite as clear cut as that, obviously if one has piles of cash then it does not make too much difference.

Rangers will be described as CLUB 12 for next yaer's fixtures - The Glorious 12th?

Also announced the 111th match between Scotland and England next year.

Note that the SFA and another mob are meeting today to discuss a new set up for the football, talk is of a "pyramidical" structure.

Something I missed in the post was that, again last Thursday, Scottish top-boy Alex Salmond was interviewed at the Levenson enquiry, whilst Rebekah Brookes was at court charged with perjury. Rebekah = Meredith from the new Disney Brave, which premiers in LA tonight, I think.

Meanwhile the Olympic torch returns to Scotland - Dumfries (Robert Burns etc.) - very briefly, in time for day 34 of the relay : Prince Wills birthday - he was taken from the womb during an eclipse on the longest day of the year. Apt for the Sun God (as above, so below)

Anon 2, thanks, note the Spanish auction of bonds today, 3.04 billion

Moon, thanks very much, totally missed it.