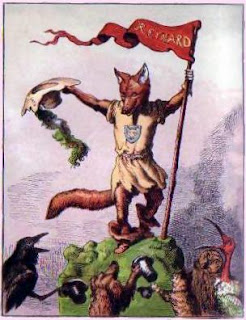 Sticking with our last tale concerning the fox and Lockerbie, whilst recalling a recent meandering concerning Da Vinci's Madonna of the Yarnwinder, we note from the BBC last week (Da Vinci painting handed over in pub car park) of how lovable Liverpudlian publican, the Silver Fox - aka Robert Graham - after "recovering" the artwork and "returning" it to the Duke of Buccleugh at Drumlanrig Castle whilst gaining a sizeable reward, was forced to take overnight shelter from "rain and traffic problems" - choosing the historical Lockerbie Manor Hotel (Lockerbie House)as his place of overnight rest.

The reader should remember that Lockerbie is named in honour of Loki, Norse god of trickery; the fox's mythological status on a similar par.

Note: We touched previously on Mr Graham in my post Tally Ho, the one about Uri Geller, Lamb Island etc.
Lockerbie Manor and Drumlanrig Castle are both historically intertwined through the Queensberry family
I have some other "happenings" to post about but am struggling for time at moment. Needless to say they all point towards the Pope's visit to the UK -commencing at Royal Holyrood in Edinburgh - on Pythagoras resonating 16/9, and the ongoing rise of Prince William for his forthcoming role as bogus Messiah/Global King.
Posted by Newspaceman at 18:04

Email ThisBlogThis!Share to TwitterShare to FacebookShare to Pinterest
Labels: e