"and the dragon gave him his power, and his seat, and great authority." 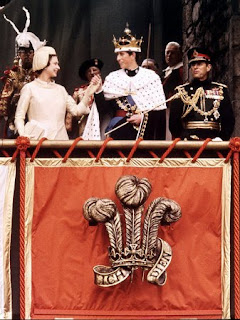 H.M. the Queen visited Caernarfon in Wales today, reacquainting herself with the historic castle where eldest son Charles was investitured as Prince in 1969, her only other visit there since in 1975.

The BBC have a report on it here which includes vintage footage of the '69 event - the "ich dien" banner above being gobbled up by two enormous dragons either side.

Today, 27/4 (thinking cubes/squares/ Pope due on 16/9), was the anniversary of another royal ceremony, apparently the date of the crowning of David 1st of Scotland on the Stone of Destiny in 1124, some 886 years ago.

David was the one who founded Pope destined Holyrood Palace after an encounter with a large white stag whilst out hunting in the shadow of volcanic Arthur's Seat. The legend goes that as the beast charged him he called out to God and grabbed it's antlers which miraculously shapeshifted int0 a cross, the deer fleeing. Dave was so grateful he built an Abbey.

The King was also well into fighting and war in a similar vein to today's monarchy. For example he led troops at the Battle of the Standard in 1138 - where the dragon flag was first flown before it's metamorphisis into the Royal Standard of today: the Lion Rampant. We read more from wikipedia:

The actions of the army which invaded England in early 1138 shocked the English chroniclers, Richard of Hexham records

"an execrable army, more atrocious than the pagans, neither fearing God nor regarding man, spread desolation over the whole province and slaughtered everywhere people of either sex, of every age and rank, destroying, pillaging and burning towns, churches and houses".

"For the sick on their couches, women pregnant and in childbed, infants in the womb, innocents at the breast, or on the mother's knee, with the mothers themselves, decrepit old men and worn-out old women, and persons debilitated from whatever cause, wherever they met with them, they put to the edge of the sword, and transfixed with their spears; and by how much more horrible a death they could dispatch them, so much the more did they rejoice."

Posted by Newspaceman at 16:21

Check out the Jagermeister logo. Stags and crosses.

Brings on the RUTS - babylon is burning..with anxiety

Had a look at it, uncanny. I am sure there is a stained glass window somewhere in Edinburgh or Linlithgow with the same "logo".

Vocanoes bring to mind dragons, living in their hills, sometimes breathing fire. One wonders if they can be timed in the manner of eclipses - if so, great dark deeds could be done by those "in the know".

Also, note Camilla broke her leg at Balmoral (hunting lodge) a couple of weeks ago, then Prince Philip had a chariot, sorry pony and trap, accident last week at Windsor (another hunting lodge).

Remember the Big Brother celebrity theme this year was dante's inferno - hell - and was based in a hunting lodge :

Plus all the other hunting stuff recently.

Also, meant to note, there is an pro-Israel exhibition being held at the Scottish Parliament in Holyrood this week.

On Monday just past we saw a story about the Loch Ness monster (an underwater dragon ?)

Note the reference in the report to St. Columba in 565, the year resonating the double 11 in a curious, almost triangular, manner.

St. Columba "saw the monster" on 22/8, same date as the Battle of the Standard.

A Hunter in Czech = Lovec [ Lov-ets], which struck me as funny but then with all the arrows through Hearts/ Harts got me wondering what 'love' really symbolises.

"A Hunter in Czech = Lovec [ Lov-ets], which struck me as funny but then with all the arrows through Hearts/ Harts got me wondering what 'love' really symbolises."

like kore/jackie o, sslling out love for power and money, emblematic of the nwo

boom boom out go the lights