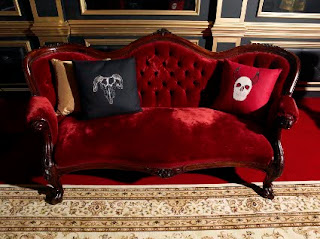 Ivana Trump popped up in my last post after she was accused of swearing at children; today it appears that she may be destined to appear in the television programme, Celebrity Big Brother, which starts in the next couple of days and apparently features a mock up lodge with wood burning stove, stuffed animal head etc. - although the main "house" which the residents will inhabit is based on Dante's Inferno, the first part (33 cantos) of his Divine Comedy poem, dealing with the medieval concept of Hell.

Coincidentally, we note from the Sun today that future One World King, Prince William, has taken up short term residence in Birkhall at Balmoral, Scotland along with girlfriend Kate Middleton, sparking rumours of an engagement proposal. From the article:

Wills and Kate were also at Birkhall last New Year, when he surprised his girlfriend of seven years with a romantic candlelit supper beside a log fire in a remote riverside fishing lodge.

Whilst it may sound like a bag of nonsense to consider that somehow these two stories are connected in any manner we can of course link them firstly with the beaver. For a beaver builds lodges and there is little doubt that William will be firing into Kate's beaver during their vacation. Freemasons too operate from lodges (we touched on their mother lodge Kilwinning in the comments section a couple of posts ago) but what many may not know is that previous contestants from the "normal" Big Brother show actually visited the lodge last February, as we note from the Irvine Herald:
Fulfilling a promise he made in the house, Kilwinning contestant Mikey Hughes brought Mario Marconi and Lisa Appleton to his home town to visit the Mother Lodge. Mario, a Master Mason, had asked Mikey about the lodge while they were in the Big Brother house.

Going along the same track, whilst bearing in mind both Dante and the freemason's preoccupation with the numbers 3 and 33, we do indeed see industrious beaver-like building of the New World Order which some, well me anyway, consider an actual Hell for humans to inhabit, rather like the original intention of Orwell's 1984. 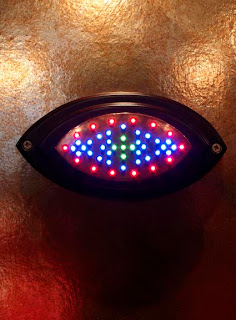 cheers
also see my post from July 2008 which notes Gordon Brown's reference to the "emerging new world order", made whilst coincidentally visiting India at the same time that a racism scandal erupted regarding a previous series of CBB. (here)

Celebrity BB.
Posted by Newspaceman at 14:15

Also the PMs house in Australia is called 'The Lodge', while Czech for boat is 'lod' pronounced 'lodye', which I thought goes with the maritime nature of globalization

For whatever reason Crowley spelt Babylon -
BABALON and it = 156 which is the same for TzYON - Zion.

Babylon-don and its Zion Olympics.
Olympia and Zion are both hills.

wife of The Donald cursing kids, wife of Tiger opened up his head with a nine-iron -- thence commenced their Cover-up (veiling)

all lodges are "mother lodges" -- i think AF recently ran a photo of a belgian bel-house....

last year i wrote extensively on the Oregon State University Beavers, based in kore-valis, o-ray-gone

a few years ago, at behest of the palindromic ReseR family, the university (very!) quietly changed its logo from OSU to OS

Obie is essentially the New Woman Order's sol niger, and Michelle is exactly as she bills herself, the Mom-in-Chief, mater de babalon, conjured out of the agony and ruins of Dealey Plaza, transplanted to the standing ruins of Daley Plaza

golf, as youve shown, figures in at many levels, including


-- its scottish origins en-meshed with masonry; golf consists of interaction between the player and the earth/planet, and only secondarily between player and player; object being to enter the hole

You think that Tiger is a pharmakos, that has popped into my mind. ?

Also, another think that totally bypassed me with the Ryanair flight from Dublin to Prestwick is that Ireland's "economic growth" between '95 and '07 was known as the Celtic Tiger.

Some would suggest that the "bust" which followed this was one of the main reasons given by the vote Yes campaign, run/financed by large corporations in the re-voted Treaty of Lisbon which forms the backbone of the European Order.

Domestic violence is hot here at the moment Ray. Believe it or not, the polic are "bluetoothing" text messages at the Rangers/Celtic & Hibernian/Hearts games to supporters along the lines of "don't go home and beat your wife just because your team loses".

I got the motif from celebrity big brother, Trump did not appear after all.

"You think that Tiger is a pharmakos, that has popped into my mind. ?"


no, but john denver and steve fossett, named in my recent posts following pieces at TTLG, were pharmaki and i suspect fossett is also long dead via ritual sacrifice -- both individuals perfectly fit the criteria for pharmaki hits

tiger is a collective scapegoat -- his wife opens up his head (cenneadach ?spelling) in a fit of rage, yet this is ignored and instead he is vilified internationally for "infidelity," because of course females must always be blameless

and as we know, are NEVER violent, except in self defense!

indeed, tiger must grovel in abject contrition and pay HER millions in hush-money to be allowed to "keep" his kids

meanwhile, mary blige opens up her hubby's face in public at her record party -- no vilification, no arrest, no imprisonment without bail, no national outrage etc

not a WORD from the entire Medea! aside from the original report

why, Mr Blige musta smashed her fist with his nose . . . the vile little Perpetrator!

she just picks up the phone, tells the cops "Take him"

doesnt take genius to see whats going on here, just the will to face reality

"Also, another think that totally bypassed me with the Ryanair flight from Dublin to Prestwick is that Ireland's "economic growth" between '95 and '07 was known as the Celtic Tiger"


v interesting because thats essentially tiger's timeline of "greatness" if one includes the tail of his amateur career -- one instance of which i witnessed quite closely in the nineties (and yes! he was wearing red n black)

the DV-scapegoating of males is a major facet of the matriarchy here, the anti-male rhetoric has been relentless for decades

that said, i know guys who take their local athletics so personally that it DOES affect their behavior, in many ways, afterwards -- almost always, these guys are drinkers, so once again we see the influence of grain spirits (ceres, demeter etc) in adverse effect on masculinity

but the strengthening of the matriarchies that comes from such mass-shaming announcements causes tremendous damage, including the continuing destruction of the family -- i'd guess it actually CAUSES more serious DV

Ray, if you get this, send me an e mail please, I have "lost" your address.